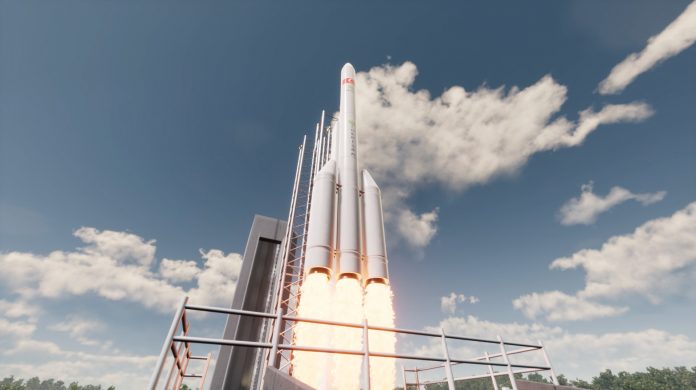 The first prototype Sounding Rocket, developed by Roketsan, which is the contractor of the Micro-Satellite Launching System (MSLS) Development Project initiated by the Presidency of Defence Industries (SSB), has been launched into space using liquid-propellant rocket engine technologies. Roketsan has thus entered the fast track in its efforts to meet its new targets.

Turkey set things in motion regarding independent access to space in 2012. In 2015, a Satellite Launch Space Systems and Advanced Technologies Research Center at Roketsan was established, and a Sounding Rocket was developed for the testing of space technologies and creating milestones for the systems in history in just two years. After Turkey’s first independent access to space was achieved in 2017, flight tests were completed in 2018 with 100% success, proving Roketsan’s capabilities in the technologies required for stage separation and controlled flight outside the atmosphere.

Rocket Reaches an Altitude of 136 kilometres

The Satellite Launch Space Systems and Advanced Technologies Research Center, opening ceremony of which was held on 30 August 2020 with the participation of President Erdogan, continues to develop many new, high-tech systems and subsystems, including MSLS.

Within the MSLS Development Project, on 29 October 2020 Roketsan successfully completed the testing of four Sounding Rockets that have been developed for the testing of space technologies. The SR-0.1 – the first prototype sounding rocket – was launched into space using solid-propellant rocket engine technologies. During the test launch, the Sounding Rocket reached an altitude of 136 kilometres and the payload capsule, which was required for scientific search, was successfully detached. The success of the tests not only contributed greatly to the development of the liquid-propellant rocket engines that will be required to meet the precise orbit placement needs of the MSLS Development Project, but also marked a first for Turkey in its launch of scientific studies in space.

Roketsan engineers designed all of the critical technologies for the launch systems and the spacecraft, and all were produced using domestic means. The following critical systems and stages have been verified:

During the tests, a number of scientific payloads, such as Star Tracer and Radiacmeter, were carried into the space environment, as a further milestone in the history of Turkish systems in space, and all relevant data was collected.

The Sounding Rocket, scheduled for launch in 2023, is planned to be used for the testing of Micro-Satellite Launch Vehicle (MSLV) technologies, with the ability to deliver payloads of 100 kilograms to an altitude of 300 kilometres. Efforts are also underway to develop an MSLV configuration with greater capacity (payload and/or orbit altitude) in which the first stage of the MSLV is supported by side engines.

Once the MSLV project currently underway at the Satellite Launch Space Systems and Advanced Technologies Research Center of Roketsan is complete, scheduled for 2026, it will be possible to place microsatellites weighing 100 kilograms and below in a Low Earth Orbit at an altitude of at least 400 kilometres. Turkey will thus gain possession of launch, testing and manufacturing capabilities, and the ability to establish a spaceport, placing it among only a few countries in the world with the necessary knowledge and infrastructure.

Roketsan’s successes will be a direct result of its agility in directing its strengths to civil projects in the field of space within a very short time. This power has been derived its acquisition of the necessary knowledge and infrastructures, the academia/industry shareholder ecosystem, and its workforce of experts in advanced technologies, garnered over more than 30 years in the field of defence with the strong support of the President Erdogan and the SSB. Roketsan’s success story, written during the first five years of Turkey’s space journey, is a source of courage and inspiration within the National Space Program.