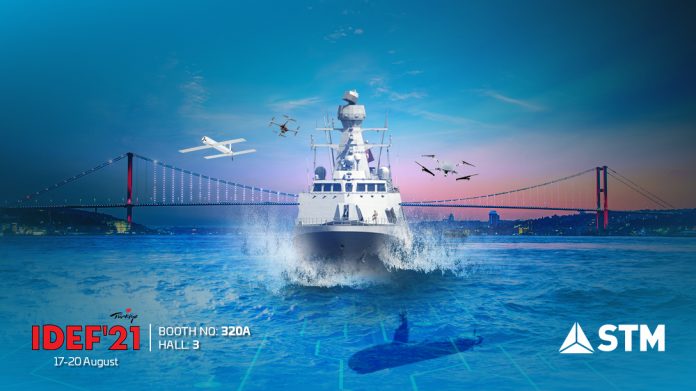 As a significant contributor to the defence industry and to Turkey’s indigenous technology initiative, STM will be present at the International Defence Industry Fair (IDEF’21) with many of its innovative and indigenous products.

IDEF, being held for the 15th time at the TÜYAP Fair Convention and Congress Centre in Istanbul on 17–20 August, 2021, will host many of the leading companies in the national and international defence sector.

Having completed various notable projects under the leadership of the Presidency of Defence Industries (SSB) of the Republic of Turkey, STM Savunma Teknolojileri Mühendislik ve Ticaret A.Ş. will be exhibiting many outstanding products at the event, ranging from naval platforms to tactical mini UAV systems, and from integrated cyber security solutions to flexible ammunition belt systems.

STM has successfully carried Turkey’s naval platform expertise abroad, having acted as the main contractor in the development of Turkey’s first indigenous frigate TCG İSTANBUL. The indigenous engineering capabilities of STM will be on display at IDEF’21 through its naval platform projects. Accordingly, STM will feature its MiLGEM, Class I Frigate, Logistic Support Ship, TS1700 Submarine and Offshore Patrol Vessel (OPV) at the event, along with its new concept designs.

As a leading and competitive producer of unmanned and smart systems, both domestically and globally, STM will also be introducing to the sector its tactical mini UAVs that are making a name for themselves in the field. The Rotary-Wing Attack Drone Loitering Munition System KARGU, which has seen its first export this year and is being actively used by the Turkish Armed Forces (TAF), the Fixed-Wing Loitering Munition System ALPAGU, which has successfully passed its ammunition firing tests, and the Autonomous Multi-Rotor Reconnaissance UAV TOGAN will be awaiting visitors at the STM stand. STM is continuing its efforts within the KERKES Project, through which UAV platforms will be given the ability to operate independently of Global Positioning System (GPS), and will also be showcasing its swarm UAV capabilities at the fair.