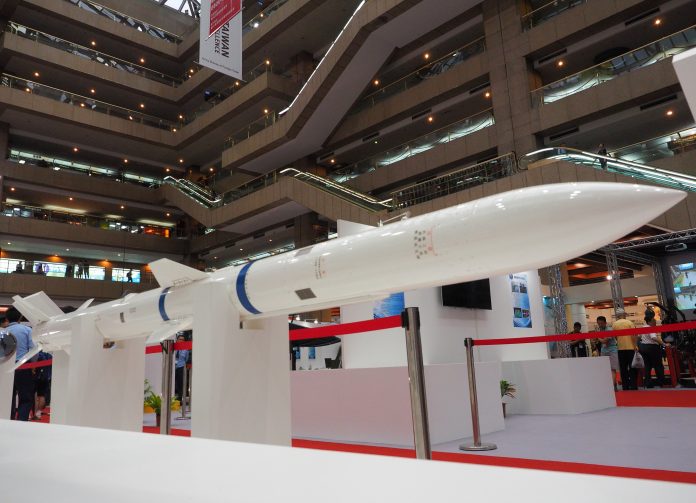 The Ministry of National Defense (MND) announced on 3 August that NCSIST has completed trials and evaluations of the new variant, which will feature extended range performance, and will soon commence series production.

According to MND specifications, the baseline TC2 missile measures 3.6 m long with a diameter of 190 mm. It has a stated launch weight of 183 kg inclusive of a 22 kg high explosive blast-fragmentation warhead. Without revealing further details, the ministry also described the TC2 as a beyond visual range (BVR) active radar-guided air intercept missile that features electronic counter-countermeasures (ECCM) capabilities as well as all-weather, all-aspect, fire-and-forget, multiple target engagement rivalling the performance of the US-made AIM-120 advanced medium-range AAM (AMRAAM).

The TC2 also employs inertial navigation in mid‐course and can receive command updates from the launch aircraft via a datalink during the initial phase of flight. It then activates its onboard active radar guidance for the terminal phase of an engagement.

The missile has reportedly been upgraded with a new rocket motor and improved electronic components that extend its range from 60 to 80 km.

The TC2 is the main air-to-air weapon carried by the RoCAF’s FC-1K IDF aircraft, which can carry four of these during a single sortie.

NCSIST earlier developed the 2.87 m-long, 90 kg Tien Chien I (TC1) AAM, which is a short-range weapon that can engage threats out to a range of approximately 8 km – roughly analogous to the US-made AIM-9 Sidewinder missile family.

A navalised version of the TC1 called the Sea Oryx was unveiled by NCSIST in late 2015.