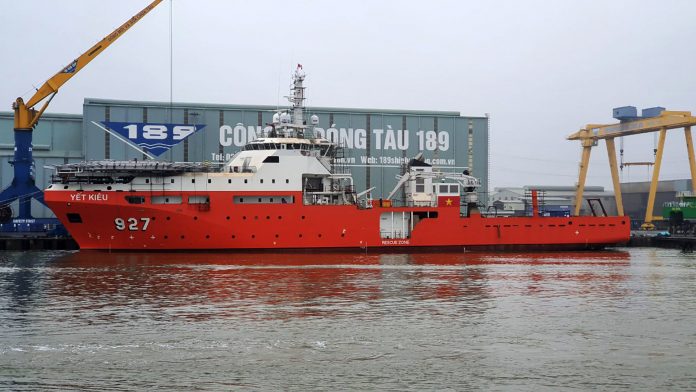 The Vietnam People’s Navy (VPN) has received its first submarine rescue vessel in a ceremony held on 30 July at the state-owned Z189 Shipyard in the northeastern city of Hai Phong.

The 93 m-long vessel is named Yet Kieu (pennant number 927) and was built by Z189 Shipyard – which is run by the Ministry of National Defence (MND) – under the MSSARS 9316 project in co-operation with Dutch shipbuilder Damen.

The multipurpose submarine rescue ship was launched in December 2019 and had been undergoing equipment fit-out and testing since. The vessel is equipped with a bow-mounted helicopter deck and a rear-mounted A-frame that launches and recovers the submarine rescue vehicle (SRV).

Yet Kieu is equipped with the 10 m-long and 3.2 m-wide LR11 SRV built by UK company Forum Energy Technologies. The SRV is operated by two personnel and is designed to dive to depths of up to 600 metres and extract up to 17 people at a time.

According to the company, the LR11 SRV also provides increased power and an advanced auxiliary thruster control system that enables it to attain underwater speeds of up to four knots, making it suitable for operation even in high currents. The SRV is fitted with a range of advanced sensors including a doppler velocity log, a fibre-optic gyroscope, a sonar, and other depth sensing equipment which enhances its navigational and positioning ability.

The VPN operationalised its first submarine unit, Brigade 189, with six Russian-made Project 636.1 (Kilo)-class diesel-electric submarines that were delivered between January 2014 and February 2017.