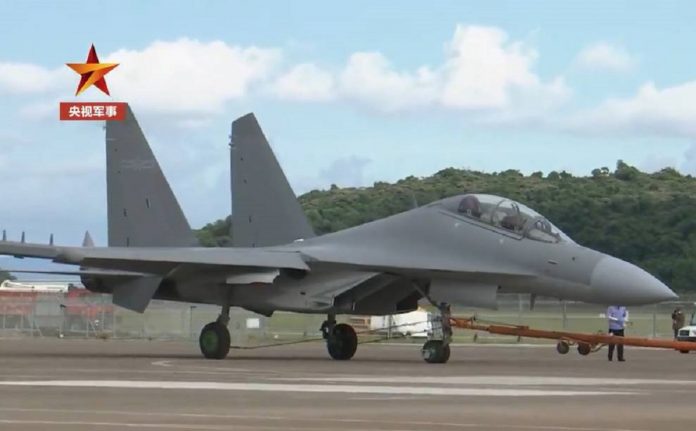 The two-seat aircraft, officially designated the J-16D, is being highlighted at the outdoor static display area in low visibility PLAAF markings.

Although no official data of the J-16D have been released, the type is clearly distinctive from the baseline J-16 multirole fighter in several aspects. Notable differences include two prominent electronic warfare pods on its wingtips as well as a shorter nose radome that is believed to accommodate an active electronically scanned-array (AESA) radar.

The standard internal 30 mm cannon and the infrared search and track (IRST) sensor system have also been removed, likely to free up space for the additional electronic systems required for its specialised role.

Moreover, the aircraft on display also features four large jamming pods under its wings and air intakes. Each pod is clearly physically distinct and is therefore likely to cover different frequency ranges in the electronic spectrum.

The first J-16D prototype reportedly first flew in late 2015 and seen with the KG600 EW pods developed by China Electronics Technology Group, although the new pods seen on the aircraft in Zhuhai have not been previously documented.

Meanwhile, China is also set to debut its next-generation carrier-based fighter aircraft within 2021, according to the chief designer of its current SAC J-15 ‘Flying Shark’ naval fighter.

Sun Cong, who led development of the incumbent PLA Navy fighter, told media at Airshow China that that “people should be able to see good news on the next-generation aircraft carrier-based fighter jet” later this year. Sun’s comments were supported by SAC’s parent company Aviation Industry Corporation of China, which announced on its official Weibo account that a new carrier-borne aircraft would be revealed by the end of the year.