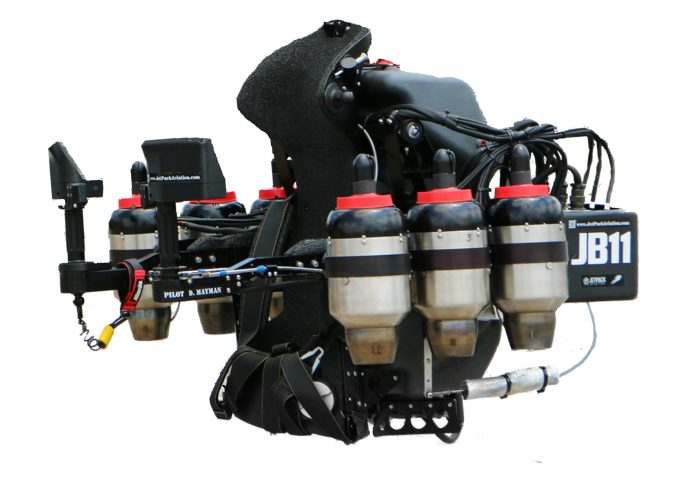 An undisclosed Southeast Asian military customer has ordered two JB-12 JetPacks worth a total of US$800,000 from Los Angeles-based company JetPack Aviation for evaluation, making it the launch customer for the new system.

The company provided few details about the JB-12 JetPack, which is designed for military use and appears to be derived from the commercial JB-11 JetPack.

The JB-11 weighs around 52 kg and when empty and is powered by six turbojet engines that have been optimised for vertical flight. The engines are affixed – three on each side – to a wearable frame with flight direction controlled by vectoring each engine. Maximum speed is quoted as more than 193 km/h, while operational ceiling is around 4,572 m.

Each engine produces approximately 40 kg of thrust, and is controlled by a proprietary flight management system that automatically balances thrust between engines and enables the pilot to maintain control in the advent of an engine failure.

Depending on the pilot’s weight and environmental conditions, the JB-11 JetPack can provide up to 10 minutes of flight time.

In contrast, the JB12 JetPack weighs around 47.6 kg and is also powered by six turbojet engines, although no further details have been made available at this stage.

JetPack Aviation is also offering the twin-turbojet JB-10 JetPack, which has an empty weight of 37.6 kg and with an 8 minute endurance (again dependent on pilot’s weight and environmental conditions).

Both commercial systems are compatible with kerosene and diesel fuels.

“The manoeuvrability of the JetPack, its small form factor, which fits inside a set of standard Pelican cases, and ease of integration with our Speeder platform to complement the JB12’s capabilities, were all factors that informed the sale,” added Mayman. “This order represents a significant step forward for us as it confirms that our development program is meeting military needs.”