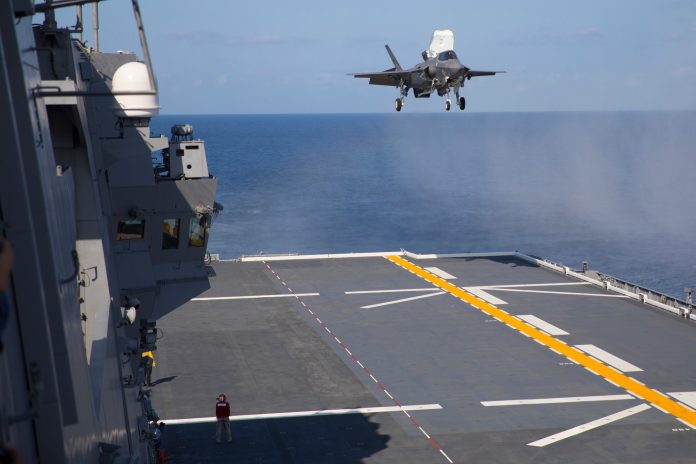 Japan’s Ministry of Defense (MoD) announced on 5 October that two US Marine Corps (USMC) have successfully conducted take-offs and landings from Izumo, which is originally designed to deploy naval helicopters but now undergoing conversion to support fixed wing aircraft operations, for the first time.

The USMC F-35Bs staged from Marine Corps Air Station Iwakuni while the flight operations were conducted in the Pacific Ocean near Japan. The effort was aimed at validating modifications to the flight deck that enable the vessel to support the fifth-generation aircraft.

The Japanese Ministry of Defense (MoD) earlier noted that the conversion of the JMSDF’s two Izumo-class vessels is being carried out in two main stages, which dovetail with the vessels’ periodic refit and overhaul programmes that occur every five years.

The first stage of work has already been completed by Japan Marine United shipyard in Yokohama, with Izumo being seen June with several enhancements such as newly painted lines to guide fixed-wing aircraft operations and the application of a heat resistant coating to the flight deck to prevent damage from the F-35B’s exhaust. Other modifications include the installation of landing equipment and lighting.

Another US$60 million has been earmarked in the 2022 fiscal year (FY) for additional conversion work, which reportedly includes US$32 million to procure Raytheon’s Joint Precision Approach and Landing System (JPALS).

The next stage of conversion, which is expected to be completed by 2026, will see the forward part of the flight deck modified from a trapezoidal to a rectangular shape, with other work expected to include changes to the internal spaces for additional aviation fuel capacity and weapons.