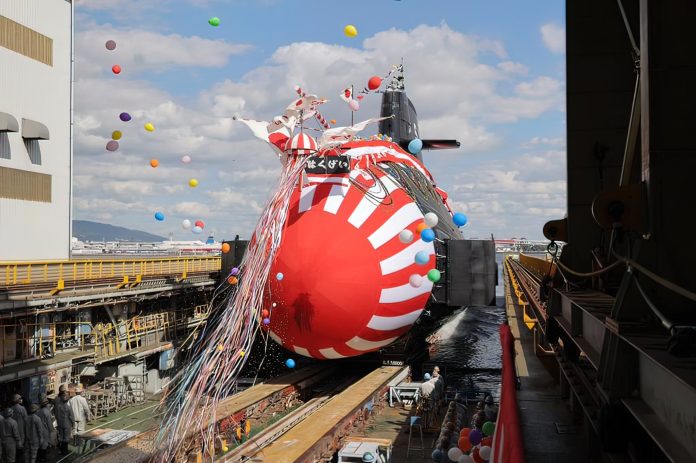 According to the JMSDF, the Taigei-class SSK – which means ‘big whale’ – has an overall length of 84 m, a beam of 9.1 m, a draught of 10.4 m, and a standard displacement of about 3,000 tonnes, which is comparable to the service’s in-service Soryu-class SSKs. It is operated by a crew complement of about 70 and has been designed to support female personnel.

Construction of Taigei cost approximately 80 billion yen (US$758 million) commenced from March 2018 and is expected to be commissioned in March 2022. In contrast, Hakugei’s production cost about 72 billion yen.

Like the last two boats of the 12-strong fleet of Soryu-class SSKs, Oryu (SS 511) and Toryu (SS 512), the Taigei-class is equipped with lithium-ion batteries supplied by Kyoto-based GS Yuasa for extended underwater endurance and range. Japan is the first country to successfully field SSKs that employ lithium-ion battery technology, as opposed to conventional lead-acid batteries.

Survivability is increased with a torpedo countermeasures system comparable to the one fitted to the last four Soryu-class boats.

In terms of armaments, the Taigei-class is equipped with six HU-606 533 mm torpedo tubes that can launch a variety of ordnance including the new Type 18 heavyweight torpedo. This is expected to replace the in-service Type 89 torpedo and feature enhanced performance and lethality.

The Ministry of Defense (MoD) has already allocated funds for the construction of three more Taigei-class SSKs: SS 515, SS 516, and SS 517. MHI has been contracted to build the first and third boats, while Kawasaki Heavy Industries (KHI) will construct the second and fourth boats.

On 30 September the MoD also requested JPY69.1 billion for fiscal year 2021 to build a fifth boat of the class, although the contract has yet to materialise. On 31 August 2021 the ministry requested a further 72.3 billion yen for fiscal year 2022 to build the sixth boat. Construction of up to seven boats have been authorised under the MoD’s 2018 Mid-Term Defense Program (MTDP), although it is believed that production could be further extended.