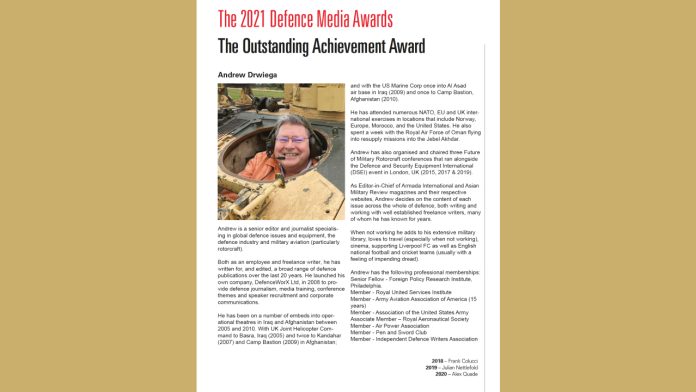 We are extremely proud to announce that our Mr. Andrew Drwiega, the Editor-in-Chief of Asian Military Review & Armada International is the recipient of the Outstanding Achievement Award at the 2021 Defence Media Awards, held at the National Press Club on the eve of this year’s Association of the United States Army convention (11-13 October 2021) in Washington DC.

The Defence Media Awards are held annually on the eve of AUSA with most of the awards relating to individual best submissions in a variety of defence categories.

Mr. Drwiega was chosen to receive the Award after being nominated by freelance colleagues, and following the deliberations of the judging panel comprising 12 professionals from a variety of backgrounds in journalism and communications.

Adam Konowe, FRAeS, committee vice-chair, National Press Club led the judging panel. Commenting on the Outstanding Achievement award, he said that the judging panel made their selection based on achievements in a career to date and on the accomplishments of the individual and dedication to craft.

“Andrew Drwiega’s writing and editing clearly displays the authoritativeness of a veteran journalist and one who has served as an embed in Iraq and Afghanistan multiple times and observed various military exercises. Andrew skilfully pairs real world experience with a vision for future technology. Andrew has seen it all and his readers are the better for it,” said Konowe at the awards.

In accepting the Award as well as acknowledging the other award winners Andrew said:
“Recognition of our efforts is always very much appreciated. I have enjoyed every moment of my time as both a journalist and editor – the person who often sets then pulls all those good articles together to produce a magazine that those in the military, government and industry often find invaluable.”

“While social media has taken the world by storm, I believe that the print media, such as Armada International and Asian Military Review, continues to deliver in-depth, quality and trusted editorial from specialist journalists.”

“Anyone can write a story – but it takes knowledge and experience learned over time to add real context and meaning – and sometimes write truth to power whether or not they want to hear it.”