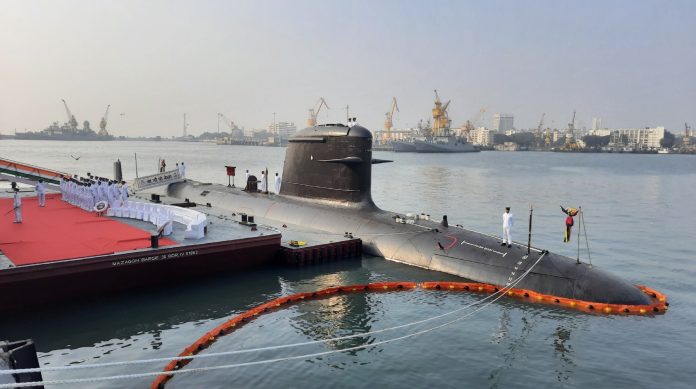 The Indian Navy has commissioned into service INS Vela, the fourth of six licence-built Project-75(I) (Scorpène)-class diesel-electric submarines (SSKs), at a ceremony in Mumbai on 25 November.

INS Vela will join sister boats INS Kalvari, INS Khanderi, and INS Karanj, which were respectively commissioned in December 2017, September 2019, and March 2021. These submarines, worth around US$3 billion in total, are built by Mazagon Dock Shipbuilders Limited (MDL) in collaboration with France’s Naval Group.

“Vela has taken the ‘Make in India’ spirit a notch higher with the fitment indigenised battery cells, which power a very silent permanently magnetised propulsion motor,” the Indian Navy was quoted as saying in The Hindu paper.

The fifth boat, Vagir, was launched in November 2020 and is expected to enter service around 2022.The sixth and final submarine on order, Vagsheer, is being constructed by MDL.

The Indian government’s Press Information Bureau (PIB) announced in March 2021 that the successful trials of a fuel cell-based air-independent propulsion (AIP) prototype would inform development of a retrofitted upgrade for the Kalvari-class SSK. The AIP system is being developed by the Defence Research and Development Organisation’s (DRDO’s) Naval Materials Research Laboratory (NMRL) at Ambernath in partnership with Larsen & Toubro, Thermax, and the Centre for Development of Advanced Computing.

Kalveri-class SSKs displace 1,775 tonnes when submerged and features advanced quieting systems designed to increase stealth. If successfully completed, the AIP retrofit to these boats would significantly enhance their underwater endurance.

The AIP retrofit will require the hulls of the Kalvari SSKs to be cut open to insert an additional 10 m section. Retrofit work is likely to be undertaken by MDL during the boats’ scheduled mid-life upgrade programme.