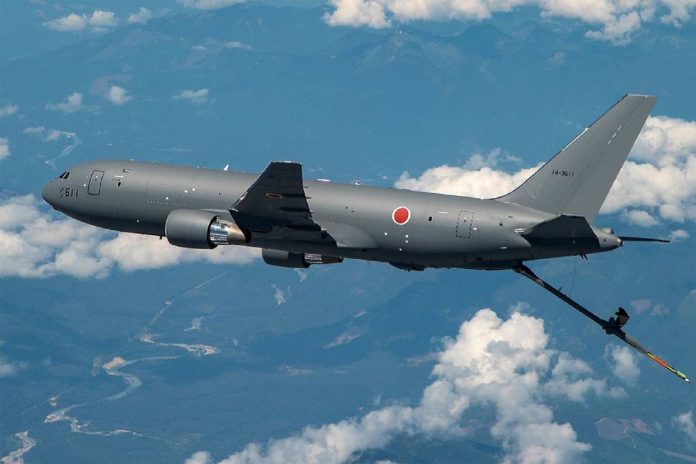 The Japan Air Self-Defense Force (JASDF) has received the first of four Boeing KC-46A air-to-air refuelling (AAR) tanker-transport aircraft on order, making it the first international operator of the type.

The aircraft made the trans-Pacific flight after departing Boeing’s facilities in Seattle, Washington, and arrived at Miho Air Base in Japan on 29 October morning local time.

“Japan’s acquisition of KC-46A tankers marks a significant milestone for both the program and US-Japan cooperation in the Indo-Pacific region and plays a critical role in the security alliance between both countries,” said Boeing Japan president Will Shaffer, noting that the aircraft will also be able to support the country’s humanitarian and disaster relief efforts with its ability to carry cargo and passengers. The company earlier stated that while the aircraft is built in the United States, Boeing’s Japanese partners produce 16% of its airframe structure.

The first group of JASDF personnel commenced training on the new aircraft type in July. According to the US Air Force (USAF), the first cohort comprised 12 JASDF trainees – six pilots and six boom operators – and had received KC-46A instruction at Altus Air Force Base (AFB) in Oklahoma.

“In this unstable, international security environment, it is important for us to get together as allies with a strong, trustful relationship,” squadron commander Lieutenant Colonel Tetsuji Kamiguchi earlier said.

Delays to the broader KC-46A programme – largely centring on deficiencies in its remote vision system (RVS) but also including Foreign Object Debris (DOF) found inside aircraft delivered to the USAF and concerns with the aircraft’s cargo-securing mechanism – have forced Japan’s first delivery back from 2020 to later in 2021.