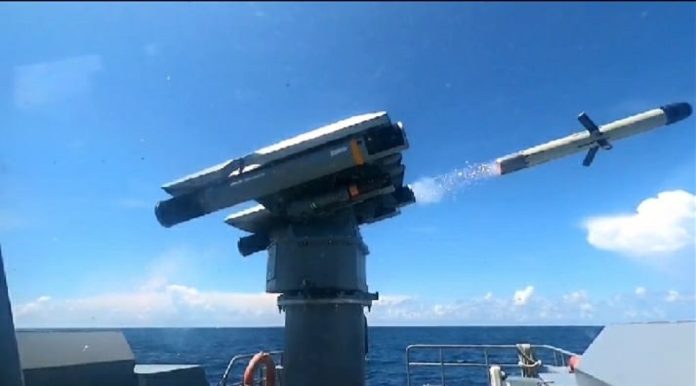 The missile was launched by one of the service’s Multi-Purpose Attack Crafts (MPACs), which is assigned to the 3rd Boat Attack Division, and destroyed a simulated surface target from a distance of 4 kilometres during the Naval Surface Fire Support (NSFS) evolution of the five-day Exercise Pagsisikap 2021, it stated.

The exercise was aimed at testing a range of capabilities including amphibious and maritime interdiction operations, surveillance and reconnaissance, as well as civil-military relations along with other traditional and non-traditional naval operations. Besides the MPAC, the service also deployed its strategic sealift vessel, BRP Tarlac, which supported an amphibious landing exercise with two landing crafts and two Amphibious Assault Vehicles (AAVs).

The Philippine Navy operates a fleet of 12 MPACs – which physically resemble the Swedish Combat Boat 90 – that were commissioned between 2009 and 2019 and are designed to perform littoral operations at speeds of up to 45 kt.

Not all of the MPACs are missile-capable. Only vessels constructed from the third and fourth production batches onwards, namely the eighth, ninth, and tenth vessels, are currently equipped with Rafael’s Typhoon MLS ER launchers as well as its Mini Typhoon 12.7 mm remote-controlled weapon systems.

According to Naval Forces Western Mindanao, the Spike-ER missile has an effective range of 8 km and is capable of penetrating 1,000 mm of rolled homogeneous armour. Each launcher can carry up to four ready to fire missiles. A missile had earlier launched as part of an acceptance test following delivery to the Philippine Navy in 2018, although that had occurred as a standalone event.