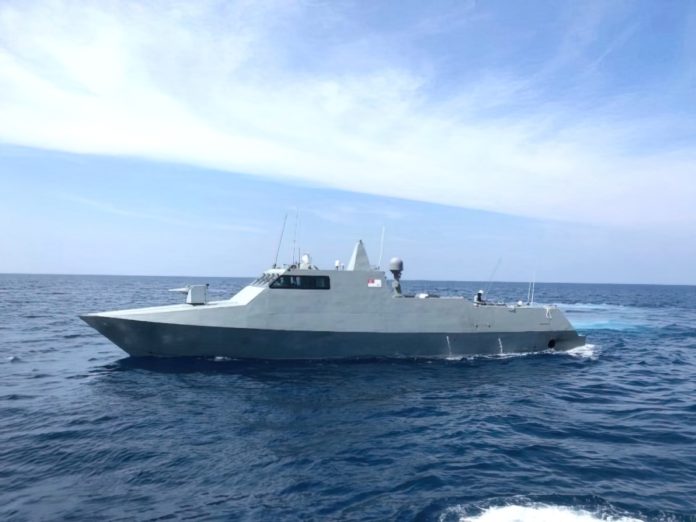 The Republic of Singapore Navy (RSN) is in the process of operationalising a new type of naval vessel amid a reorganisation of its Naval Diving Unit (NDU), the Ministry of Defence (MINDEF) announced on the 50th anniversary of the elite unit’s founding on 9 December.

The new vessel, designated the Combatant Craft Large (CCL), adopts a 26m long aluminium hull with a beam of 5m and is being operationalised as part of the NDU’s capability development for maritime security missions, although it is certain that it will also support its typical underwater and surface special operations taskings.

MINDEF noted that the CCL is “designed and built locally” with the aid of the Defence Science and Technology Agency (DSTA). The vessel is powered by a pair of MTU engines driving Rolls Royce Kamewa waterjets, enabling it to attain stated speeds of over 35kt out to a range of 400 nautical miles.

The CCL is operated by a four-person crew comprising the boat commander, coxswain, navigator and engineer, and reportedly has provision for up to six additional personnel.

Its primary armament is a foredeck-mounted Leonardo Hitrole G remote weapon station armed with a 12.7 mm heavy machine gun. Situational awareness is boosted by a mast-mounted electro-optical (EO) system with eye-safe laser, as well as an on-board command and control (C2) system and datalink.

“The CCL is equipped with the latest electro-optics sensors so that it can operate in both day and night,” stated MINDEF.

“Additionally, a comprehensive communication suite facilitates seamless information exchange and coordination with the [RSN] ships and shore headquarters,” the ministry added. “This enables a common maritime situational awareness for the delivery of quick and effective responses during operations.”

The NDU also operates a fleet of customised 11.5m-long rigid hull inflatable boats (RHIBs) supplied by Zodiac Milpro, which can carry up to 15 personnel in standard configuration for seaward interdiction as well as boarding operations, and are designed Combatant Craft Medium (CCM) in service. The CCM is typically armed with a 7.62 mm general purpose machine gun located near its bow, although heavier armaments can also be fitted if desired.

Both CCL and CCM platforms will be assigned to the Special Boat Group, which is responsible for raising, training, and sustaining specialised craft.