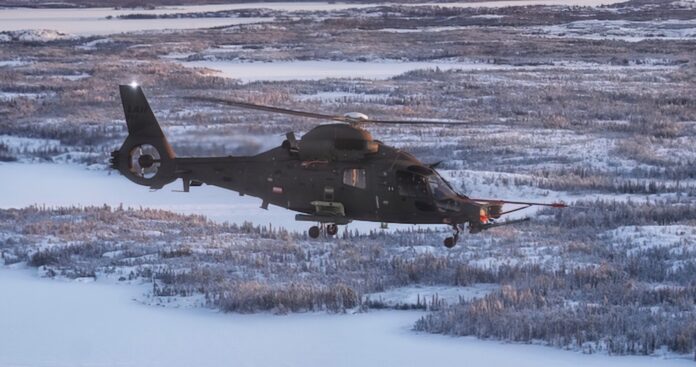 DAPA noted that the trials were performed at Yellowknife in Canada’s Northwest Territories by personnel from DAPA, KAI, and the Agency for Defense Development (ADD) for a period of nine weeks between December 2021 and February 2022.

The test helicopter, designated prototype 002, undertook 40 flights to test 165 items including engine cold soaking. These are aimed at ensuring that the helicopter is capable of operating in cold weather conditions without loss of manoeuvrability and performance.

The LAH design is based on the twin-engine Airbus Helicopters H155 helicopter and is powered by two Arriel 2L2 turboshaft engines co-developed and by Safran Helicopter Engines and Hanwha Group.

Designed for armed reconnaissance operations, the helicopter is equipped with a chin-mounted 20 mm rotary cannon under its nose as well as provision for locally developed anti-tank guided missiles (ATGMs) and 70 mm rockets. It also carries an electro-optical/infrared (EO/IR) sensor, active self-protection systems, as well as upwards-directed exhausts to reduce its infrared signature.

Development of the LAH commenced in June 2015 along with the Light Civilian Helicopter (LCH) as part of an integrated civil and military helicopter development project involving DAPA, KAI and the Ministry of Trade, Industry, and Energy (MOTIE).

The first LAH prototype was unveiled in December 2018 and flown for the first time in July 2019, with provisional combat capability declared by DAPA in December 2020.

The agency expects the LAH to be fully developed by the end of 2022 following further testing and validation. The RoKA is expected to acquire around 210 LAHs from 2023 to replace its ageing legacy fleet of Bell Helicopters AH-1F and 500MD/Tow Defender attack helicopters.

Further development for the LAH include manned-unmanned teaming (MUM-T) trials with the LAH and a canister-launched unmanned aerial vehicle (UAV).