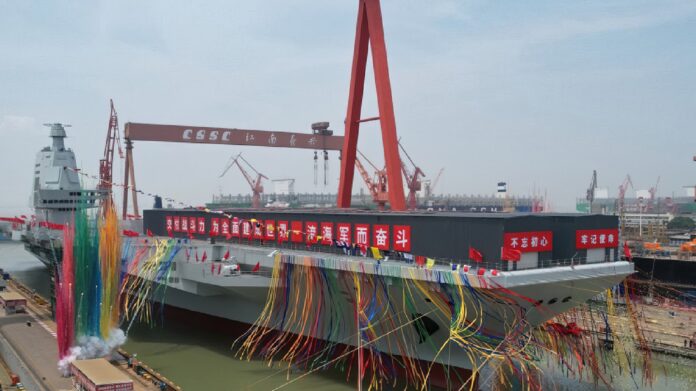 The People’s Liberation Army Navy (PLAN) China launched its third aircraft carrier, which has been christened Fujian, on 17 June at the Jiangnan Changxingdao shipyard in Shanghai, the China’s state-run Xinhua news agency reported on the same day.

The 80,000-plus tonne carrier, which is also known locally as the Type 003, will be a significant new capability for the rapidly expanding PLAN given that it will be the service’s first catapult assisted take-off but arrested recovery (CATOBAR)-capable vessel and equipped with electromagnetic catapult and arresting system technology, an advanced system currently only found aboard the US Navy’s new nuclear-powered USS Gerald Ford. However, unlike its American counterpart, the Chinese carrier will be conventionally powered.

Its first two carriers, Liaoning and Shandong, which entered service in September 2012 and December 2019 respectively are in contrast built with ski-jumps and configured for short take-off but arrested recovery (STOBAR) operations. Both earlier carriers are also smaller and 20,000 tonnes lighter, which translates into less aircraft capacity and range. The ski-jump also imposes considerable constraints on the take-off weight and payload of the aircraft being launched.

Official images released by Xinhua show that shelters have been constructed along Fujian’s flight deck, which indicate that the electromagnetic catapult is still being fitted out.

According to local media, the carrier is expected to support an improved version as well as an electronic warfare variant of the Shenyang J-15 multirole fighter as well as two new aircraft that are currently in advanced stages of development: a turboprop-powered airborne early warning and command aircraft called the KJ-600, and a twin-engine stealthy multirole fighter understood to be the J-35.

Fujian also features an advanced deck coating developed by state-owned defence prime China Aerospace Science and Technology Corporation (CASC). The company announced on 22 June that its 703 Institute – also known as the Aerospace Research Institute of Materials & Processing Technology (ARIMPT) – had supplied its “second-generation multifunction coating” for the carrier’s jet blast deflectors, as well as the non-skid coating for its flight deck.

The carrier has been named after the southeastern province that is closest to Taiwan, a self-ruled island that Beijing says must be reunified with the mainland even by force. It will now undergo further yard testing and equipment fitting out before embarking on a series of trials, a process that will likely take around two years before it can be commissioned into service.