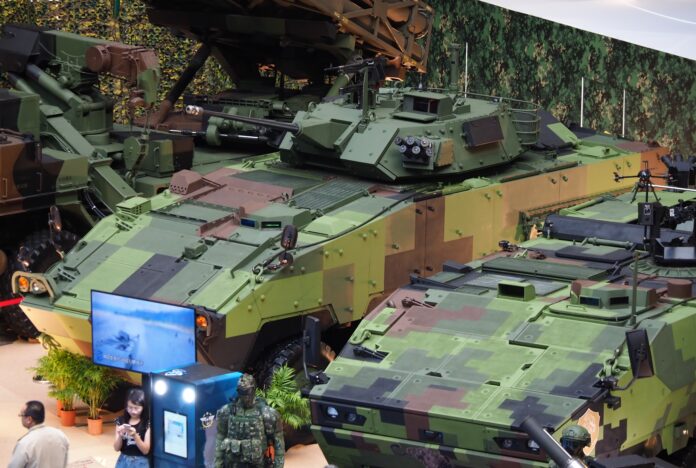 The Armaments Bureau told media at a demonstration in mid-June that 305 CM-34 IFVs are on order for the Republic of China Army (RoCA), with 173 vehicles delivered since production commenced at the 209th Arsenal’s production facility in the central township of Jiji in late 2019.

The CM-34 IFV is based on the common 6.35 m long, 2.7 m wide, and 2.2 m steel hull that is also used by the CM-32 and CM-33 Clouded Leopard armoured personnel carriers (APCs), although the IFV variant has a higher combat weight of 24 tonnes – two tonnes heavier than its counterparts – and can only carry up to six dismounts as opposed to eight due to the penetration of the two-person armoured turret.

The IFV’s main armament centres on the stabilised Orbital ATK Mk 44 Bushmaster II 30 mm dual-feed autocannon with secondary armament comprising a 7.62 mm co-axial gun and roof-mounted T74 7.62 mm general purpose machine gun. The turret itself is developed by the state-run National Chung-Shan Institute of Science and Technology (NCSIST) and is capable of day- and night-time engagements.

It was earlier announced in July 2021 that the Armaments Bureau’s munitions specialist, the 202nd Arsenal, won a NT$14 million contract to produce 30 mm armour-piercing rounds for the new IFV.

The agency also earmarked NT$768 million to develop a new direct fire support variant of the Clouded Leopard armed with a 105 mm rifled gun. Local media reported that prototyping work on the fire support vehicle will be completed by the end of 2023.

The MND also showcased the M2 prototype of the next-generation 8×8 Clouded Leopard II armoured vehicle development in public for the first time at the 2019 edition of the Taipei Aerospace & Defense Technology Exhibition.

The prototype is the second of two Clouded Leopard II development testbeds built by the 209th Arsenal at the in partnership with the Hsinchu-based Industrial Technology Research Institute. Both vehicles have been in trials since 2017. A key feature of the new vehicle is its hydropneumatic suspension system, which replaces the double wishbone suspension of the current CM-32 and CM-33 APCs and improves overall ride quality and responsiveness.