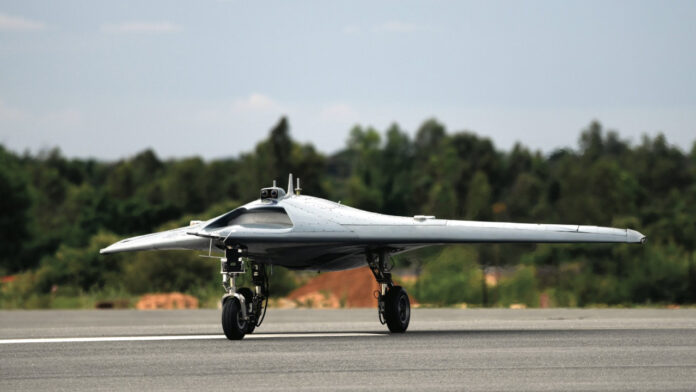 The Indian Defence Research and Development Organisation (DRDO) has test flown a subscale technology demonstrator of a flying wing unmanned combat aerial vehicle (UCAV) for the first time, the agency announced via the Press Information Bureau (PIB) on 1 July.

The DRDO said the UCAV demonstrator was flown from the Aeronautical Test Range (ATR) in Chitradurga. The subscale aircraft – developed by the DRDO’s Aeronautical Development Establishment (ADE) – serves as a testbed for validating the design of the Indian Air Force’s Ghatak UCAV programme, and is also known as the Stealth Wing Flying Testbed (SWiFT).

“Operating in a fully autonomous mode, the aircraft [performed] take-off, waypoint navigation, and a smooth touchdown,” the DRDO stated. “This flight marks a major milestone in terms of proving critical technologies towards the development of future unmanned aircraft.”

A video of the test flight indicates that the DRDO has developed two different prototypes, the first being a pure flying-wing design and the second featuring a vertical tailfin. The agency previously stated that the demonstrator should be able to operate for up to an hour within a line-of-sight range of 200 km and up to an altitude of around 6,000 m.

The DRDO earlier announced in January 2021 that the SWiFT’s indigenously developed retractable landing gear, which weighs one tonne and is specifically designed to fit into the limited internal bay of the UCAV, had been delivered by its Combat Vehicles Research and Development Establishment (CVRDE).

The Ghatak programme, which commenced around 2009, calls for a highly autonomous UCAV with provision to launch missiles and laser-guided munitions. The UCAV is expected to be equipped with a large internal weapons bay.

The demonstrator is thought to be powered by a domestically developed derivative of the Kaveri turbofan engine, although known problems with the engine type suggest that it is likely that a Russian-made powerplant is being used as a stopgap measure. The DRDO asserts that the airframe, flight control, and avionics systems used for the aircraft were developed indigenously.