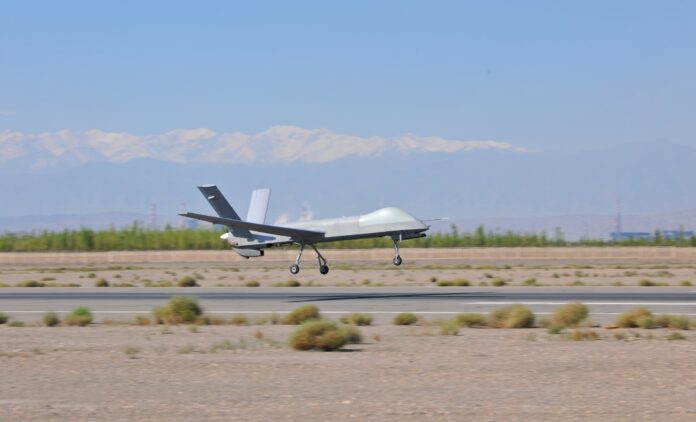 Inspired by the US-made RQ-1 Predator design, development of the CH-4 UAV commenced in 2009, with the first production-ready example rolled out in 2014. Glass fibre-based composite materials are used extensively to reduce the overall weight of the air vehicle as well as its radar cross-section (RCS).

Two variants are currently offered: the CH-4A, which is configured principally for reconnaissance missions with a flight endurance of 30 hours; and the strike-oriented CH-4B, which can carry a 760lb (345kg) weapons payload but has a shorter flight endurance of 14 hours.

According to information revealed by a submission for a national science award, more than 30 CH-4 UAVs – valued at $700 million – have been exported since the air vehicle was introduced in late 2014 through 2018 to customers such as Iraq, Nigeria, and Saudi Arabia.

More recently, the Indonesian Air Force (TNI-AU) acquired an undisclosed number of CH-4B UAVs which have been equipped with satellite communications systems to extend their operating range to 1,080 nautical miles (2,000km). The TNI-AU is believed to be the first Southeast Asian air force to possess an armed UAV capability, having received AR-2 precision guided missiles for the CH-4B fleet in April 2021.

An electronic warfare pod, possibly for communications or signals intelligence gathering missions, has also been observed equipped to one of the TNI-AU’s CH-4 UAVs.

Pakistan has received five CH-4 UAVs, according to official export-import (EXIM) logs released by the government. The UAVs, which were delivered ALIT, arrived in the South Asian country in January 2021. It is unclear, however, which variant of the CH-4 was ordered by Islamabad, and whether this delivery is part of a larger UAV order or just a limited acquisition of this UAV type, possibly for testing.

Upgraded versions of the CH-4 have also emerged in recent years, including longer-ranged models designed for extended maritime patrol and surveillance operations.