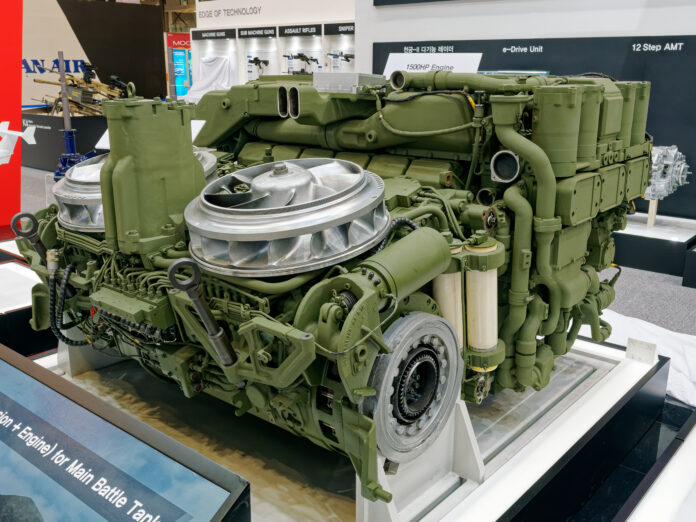 Germany’s Renk Group announced on social media on 23 October that it has signed a contract with the South Korean manufacturer of the K2 ‘Black Panther’ main battle tank (MBT), Hyundai Rotem, to supply 197 power transmission systems from 2023 to 2025 with an option for the delivery of 800 more from 2026.

The new transmissions have been earmarked for the 180 MBTs worth up to US$3.37 billion ordered by Poland on 26 August. Under a memorandum of understanding (MoU) signed earlier in July with the central European country, South Korea will transfer technology for licensed production of up to 820 upgraded K2 MBTs designated K2PL in Polish armed forces service.

The first 10 K2 MBTs have already been formally handed over to Poland at Hyundai Rotem’s Changwon manufacturing facility on 19 October.

The selection of the German-made power transmissions came after South Korean industry highlighted the maturity of a domestically developed system at the DX Korea 2022 exhibition in September, casting further doubts on the maturity of the indigenous transmission system is being developed by SNT Dynamics, which told AMR at the event that its 1,500 hp-class EST15K transmission system has entered the final stages of development and that it is aiming to supply the transmission for integration to the third or fourth batches of K2 MBTs that will be manufactured from 2023 onwards.

Despite its successes in producing what has been widely seen as a world-class MBT with the K2 platform, South Korea has nevertheless faced considerable technical challenges with the tank’s powerpack development – which comprises the engine and transmission system – for at least 15 years.

The Defense Acquisition Program Administration (DAPA) announced in March 2011 that mass production of the K2 MBT for the Republic of Korea Army (RoKA) would be delayed due to the unsatisfactory performance of the local powerpack then under development by Doosan Infracore (now Hyundai Doosan Infracore) and SNT Dynamics. The first production batch of K2 MBTs were thus equipped with Renk HSWL 295 transmissions coupled to the German MTU MT883 Ka-500 V12 diesel engine as a stopgap measure.

Hyundai Rotem was able to equip tanks from the second production batch with the Hyundai Doosan Infracore DV27K engine, although the SNT Dynamics was again unable to prove the maturity of its EST15K transmission and the resultant powerpack for this production tranche combined the local DV27K engine with Renk’s HSWL 295 transmissions. The second batch of K2 MBTs were delivered in 2019.

According to SNT Dynamics, the EST15K transmission has a dry weight of 2,500 kg and features six forward and three reverse gears and can support engines rated at between 1,500 and 1,650 hp at a maximum input speed range of 2,000 to 3,000 rpm. AMR understands from the company that it aims to introduce the new transmission in the latter stages of the third K2 production run, and fully from the fourth batch of tanks although this ultimately depended on DAPA’s decision.

The repeated delays of a fully indigenous powerpack for the K2 MBT has become a concern for DAPA, given that the effort is closely linked to broader imperatives to reduce reliance on foreign components and systems for critical military programmes.

“The transmission is a key component of [MBTs],” said former DAPA Minister Wang Jung-hong in 2020.

“If the domestic development and production of the local transmission is achieved in the K2 tank it will [enhance] military operations as well as domestic revenues, job creation, and future export opportunities,” added Wang.