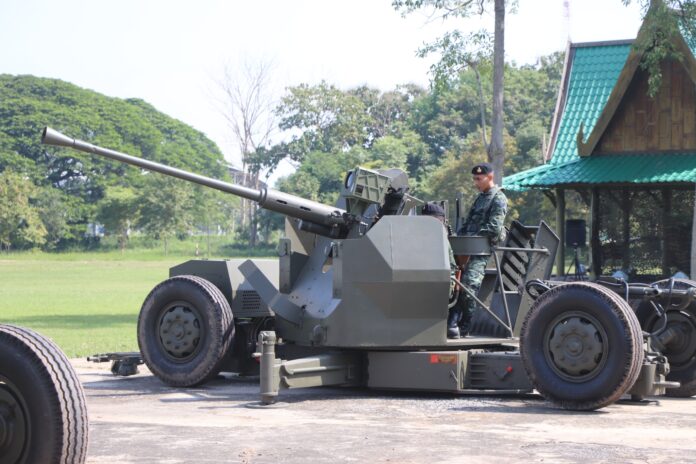 The enhanced AA guns, designated the L70 OES (Type A Improved) were shown being operated by personnel from the RTA’s 2nd Anti-Aircraft Artillery Battalion, who underwent a company-supported training exercise from 18-20 October. Accompanying literature stated that troops were able to control the weapons either manually or via remote control.

The 40 mm L/70 AA gun has been in RTA service in the 1950s and has been upgraded several times during the intervening years. The latest update, worth 446.5 million baht (US$13.9 million), was awarded Armisys under a sole-source contract in February 2020.

The RTA earlier highlighted other local enhancements to the weapon at the latest edition of the Defense & Security exhibition in Bangkok in late August, which centred on local efforts to update the weapons with new servomotor systems and a modern digital controller, as opposed to the original hydraulic motors to enhance traverse and elevation performance. Reliability and maintainability has also been improved as a result of this work.

Earlier upgrade work to the venerable weapons included LVS fire-control systems (LVS FCS) supplied by Saab Dynamics (now Saab) in the late 1990s, which were aimed at improving first-round hit probability. The LVS FCS was developed as a private venture and measures the 3D target trajectory independently of the gun movements, computing the aim digitally and controls gun direction automatically.

The standard system has a day sight which incorporates a laser rangefinder, and is provisioned for night-time engagements with the addition of an optional image intensifier or thermal imager.