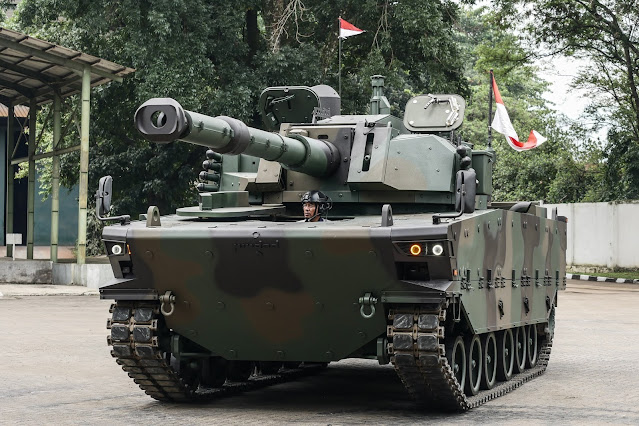 These ten systems without turrets are part of a total order of eighteen tanks for the Indonesian Army. Harimau Hitam (Black Tiger) is the Indonesian name for the Kaplan-MT the development of which has been a cooperative endeavour by the two firms. The shipment will be delivered to a PT Pindad facility at which CMI Defense Cockerill C3105 turrets will be installed prior to turnover to the Army.

The Marinaru/Kaplin-MT has a combat weight of 35 tonnes making it more suited to less developed road and bridge networks thus expanding its potential operating area. The vehicle uses a forward located Caterpillar C13 711 hp power pack coupled to an Allison X300 transmission. This provides a respectable 22,2 hp/tonne power to weight ratio. The modular armour package offers 14.5mm heavy machine gun armoured piercing protection at 200 meters. This can be supplemented across the frontal arc to 30mm protection. Its Vee hull resists a 10 kg mine blast.

The Cockerill CT-CV 105HP (High Pressure) equipped turret employs a rotary automatic loader with sixteen ready rounds and is fully stabilized. The rifled cannon is compatible with all standard NATO ammunitions including armoured piercing, high explosive, and smoke. In addition, it can fire the laser-guided Falarick 105mm cannon launched anti-tank missile. It a 7.62 coaxial machine gun and can mount another on the turret roof. Thermal sights including a panoramic hunter-killer capability and digital fire controls offer accurate day/night engagements. The tank is equipped with a 360-degree perimeter surveillance camera system to facilitate situational awareness by the three-man crew.

The order for these Harimaru tanks was first place in 2019 based on prototypes unveiled in May 2019 at the INDEF expo. The first production model with improvements in visibility and ergonomics was displayed at INDEF in August 2021. Army testing occurred in the Spring of 2022. Although the Philippines and Bangladesh had shown early interest both eventually selected other solutions (the Elbit Sabrah for the former and NORINCO VT-5 by the later). Thus, Indonesia will be at this time the sole fielding of the Harimaru.