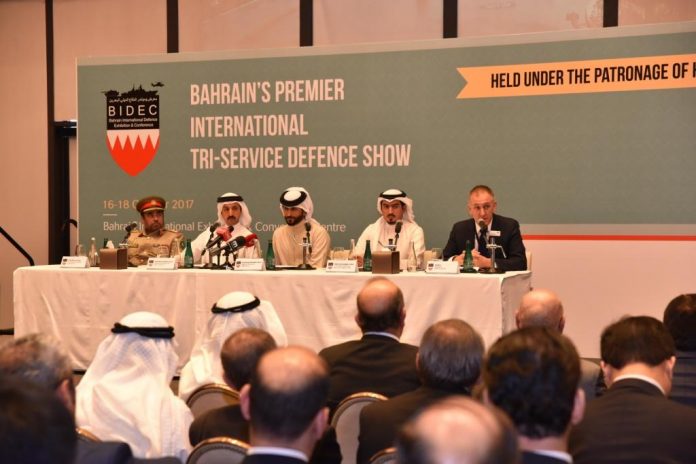 Interest in BIDEC 2017, one of the region’s most important international defence exhibitions, rises as endorsements begin.

Bahrain’s pioneering defence exhibition, scheduled to be held in October this year, has attracted considerable interest at other international defence exhibitions. The promotional campaign for BIDEC includes several official visits to international defence and security exhibitions, raising awareness of BIDEC 2017 amongst exhibitors, visitors and VIP Delegations. So far, the BIDEC 2017 team, alongside delegations from Bahrain Defence Force, has visited SOFEX in Jordan, Indo Defence in Indonesia, SHOT Show in USA, IDEX in UAE, LIMA in Malaysia, IDEF in Turkey and others. Participating in these events has been a huge success, the promoters of BIDEC 2017 say, drawing attention to BIDEC and the potential that the Kingdom of Bahrain holds as an ideal venue for world class exhibitions and events.

Along with the significant support shown from Bahrain Defence Force, Royal Bahrain Naval Force and Royal Bahraini Air Force, many companies have since confirmed their participation in the upcoming BIDEC 2017. Following the increased interest, the floor plan for BIDEC 2017 has now been expanded to cope with the growing demand for space.

Speaking about the event, HH Shaikh Nasser bin Hamad Al Khalifa said, “We look forward to developing a world-class defence exhibition and conference that will highlight the nation’s aspirations of a modern and forward thinking armed forces. We hope that more Bahraini companies will participate in this event, showing their support for an initiative that will support the Bahrain Defence Force and will facilitate important partnerships and the sharing of technology and inventions in this sensitive and highly critical area. ”

The event is fully supported by Bahrain Defence Force and will be organised by Clarion Events, the largest organiser of defence and security events in the world, with over 200 other events across different sectors.

Managing Director of Clarion Defence & Security Tim Porter said, “BIDEC offers exhibiting companies the opportunity to demonstrate equipment and capabilities, and to be seen on a high profile, international stage. The Conference alongside BIDEC will also provide the ideal platform to meet key decision makers from the government, military and defence industry, giving unprecedented opportunities to discuss the biggest challenges the industry is facing and identify potential solutions and areas of collaboration.”