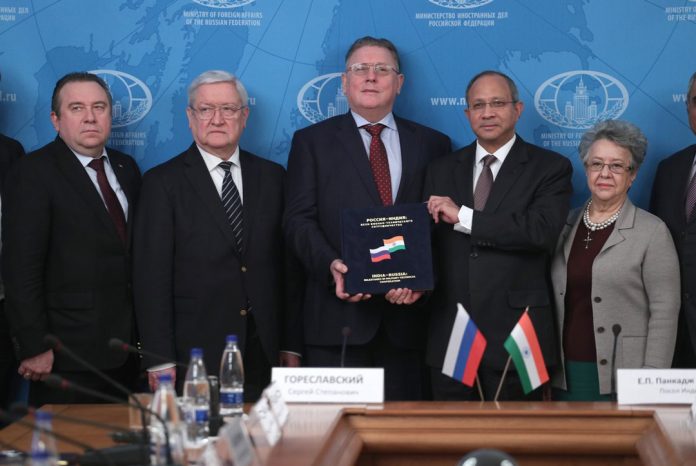 The event was attended by Sergey Goreslavsky, Deputy Director General of Rosoboronexport, Yury Kaptelkin, Director of the Office of the Company’s Director General, Ambassador Extraordinary and Plenipotentiary of the Republic of India to Russia Pankaj Saran, as well as representatives of the Russian Foreign Ministry, Russia’s Federal Service of Military-Technical Cooperation, Rostec State Corporation, and Russian defense enterprises involved in military-technical cooperation.

“The history of military-technical cooperation between Russia and India, which dates back almost six decades, is most clearly and exhaustively presented in the book. This cooperation began with a modest episode concerning a donation of two Il-14S aircraft in the de-luxe version by the head of the Soviet state to the Indian government. It has steadily evolved and today, within the framework of the strategic partnership between the two countries, shows the widest variety of the forms and types of relations: supply of military and dual-use products, joint ventures, licensed production of arms and military equipment, as well as joint R&D efforts on advanced weapons,” said Sergey Goreslavsky..

The photo book was prepared under the sponsorship of Rosoboronexport and with the assistance of the Company’s employees, whose professional activities have been intrinsically associated with India for dozens of years. It includes previously unpublished photos of bilateral meetings and negotiations, including summits, ceremonies for the transfer of military equipment, its operation, joint exercises, and many others. Two hundred thirty pages of a peculiar photo record encompass the entire period of Russian-Indian military-technical cooperation. The text of the book tells about the formation, development and current status of the partnership between the two countries.