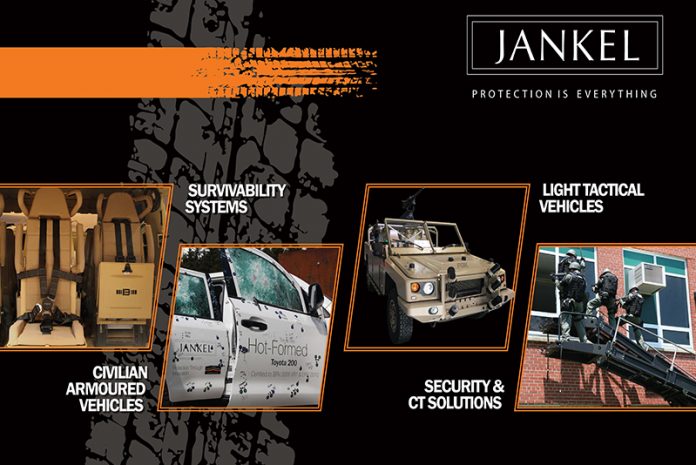 Jankel, a world-leader in the design and manufacture of high-specification defence, security and NGO vehicles and protection systems, is celebrating 15 years of success in Australia at the Land Forces 2018 event. Land Forces 2018 is taking place 4-6 September in Adelaide, where Jankel will be exhibiting their capabilities on stand number 4L11.

Since entering the Australian market in 2003 with sales of Civilian Armoured Vehicles (CAVs) based on a Toyota chassis, Jankel has delivered a wide range of projects. Jankel has won contracts as a direct prime to the Australian MoD’s Capability Acquisition and Sustainment Group (CASG) and, formerly, the Defence Materiel Organisation (DMO). In addition, Jankel is a key supplier to a number of other prime contractors and key partners including Supacat and JCB. Jankel’s Australian defence and security projects have included the provision of bespoke armour systems and up-armouring solutions for: Perentie; JCB 535-95; REDFIN 1A and REDFIN 1B SOV programmes. Through their business activity in Australia, Jankel has also secured contracts in New Zealand, again, working directly to the MoD and as a supplier to their partners. Jankel has been active in supporting Australian Industry Content (AIC) compliant programmes including the establishment of locally manufactured product lines. For instance, in support Supacat’s REDFIN programme, Jankel partnered with Tectonica who manufactured Jankel’s range of BLASTech mitigation seats directly in Australia under a sub-contract. In total, Jankel’s Australian business has generated over AUD $35 million across a 15-year period.

Looking ahead, Jankel is focused on the continued expansion of their Australian business footprint. Specifically, in addition to marketing their wide range of protection system capabilities, Jankel is targeting the provision of specialist seating and survivability systems for Land 400 phases 2 & 3 as well as a number of opportunities to deliver specialist tactical, counter-terror and civilian armoured vehicle fleets for specialist user groups.

Dan Crosby, Commercial Director at Jankel said: “Australia continues to be an important market for Jankel. We’ve enjoyed a significant amount of success to date which has further underlined the credibility of the products and services we are able to offer. Our protection systems, many manufactured locally in Australia, are in service across multiple platforms saving Australian lives today and into the future.” He added: “We’ve successfully developed and broadened our business model in recent years to become a company that delivers a wider range of fully engineered tactical and military vehicles with the benefits of highly capable and certified COTS chassis systems. In addition to our protection system business, we’re winning complete vehicle programme contracts in Europe – something we’re also keen to expand in Australia and across the wider Asia Pacific region”.