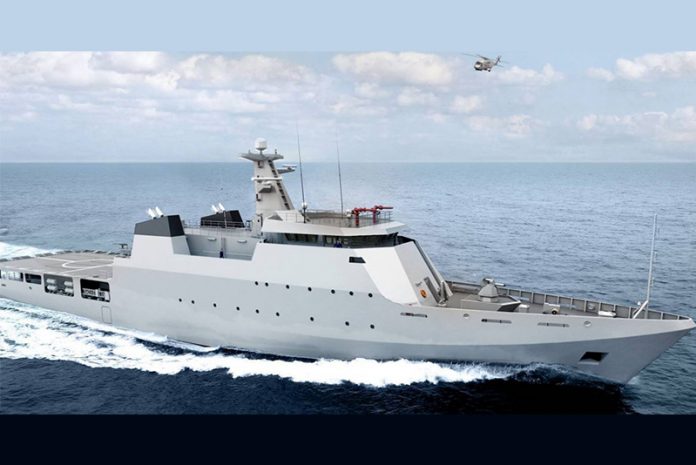 Work on the first of two 1,900 tonne multirole offshore patrol vessels (OPVs) for the Pakistan Navy is well underway, with a steel cutting ceremony for the first ship held at Damen’s Galati facility in Romania during the first half of the year. The ceremony was attended by PN deputy chief of Naval Staff Projects, Rear Admiral Farrokh Ahmad.

The 90 metre OPVs will have a top speed of 22 knots and displace approximately 1,900 tonnes at full-load. They have been described by the Navy as state-of-the-art vessels that are well suited for a diverse range of missions, including anti-surface (ASuW), anti-air, and maritime security operations.

The ships are understood to be designated OPV 1900 and are expected to carry out helicopter centric operations such as search and rescue missions, as well as intelligence gathering and surveillance operations. The contract for the OPVs was signed in June 2017, and the second ship will also be built in Romania.

The OPV and patrol deals are recent examples of Pakistan’s drive to diversify its supplier base for naval platforms, which now includes frigates, patrol vessels and submarines acquired or jointly developed with China, corvettes and fleet tankers in collaboration with Turkey, and now armed OPVs in partnership with the Netherlands.

Meanwhile, Louisiana-based shipbuilder Swiftships announced that the Navy placed an order for two 75m corvettes in November 2017, although that deal appears to have been stalled following the acquisition of the two OPVs and four Ada (MILGEM)-class corvettes from Turkey. However, the company is reportedly in discussion with KSEW for an undisclosed shipbuilding programme.