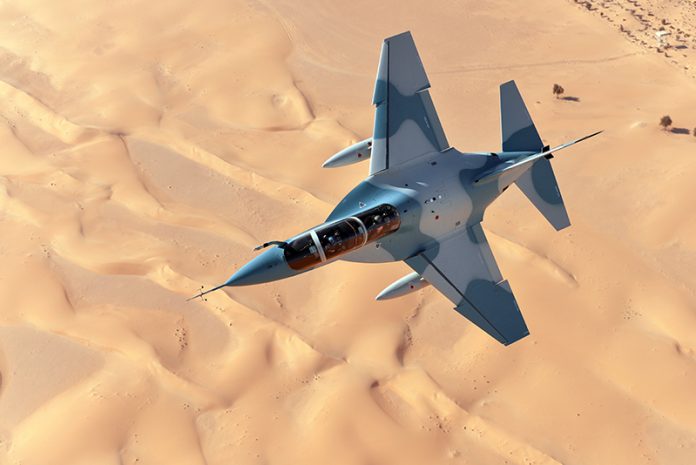 Generally, these are close air support (CAS) missions that have to be carried out in urban areas and for battlefield air interdiction, as well as for homeland security and air policing, tactical reconnaissance and support for combat personnel recovery, where the use of low-cost aircraft equipped with radar, a designator pod, modern and technologically advanced self-protection systems, a data link and a critical air-to-air refuelling capability would be enough.

The M-346FA was developed from the M-346’s AJT advanced training version already in service with the Italian, Israeli, Polish and Singapore Air Forces. In comparison with the latter, the FA version’s unique features consist of upgraded avionics and two additional wing-tip hard points (making seven in total) in order to have two air-to-air missiles. Otherwise the M-346FA maintains the same full dual role capability while offering an extremely advanced Integrated Training System. 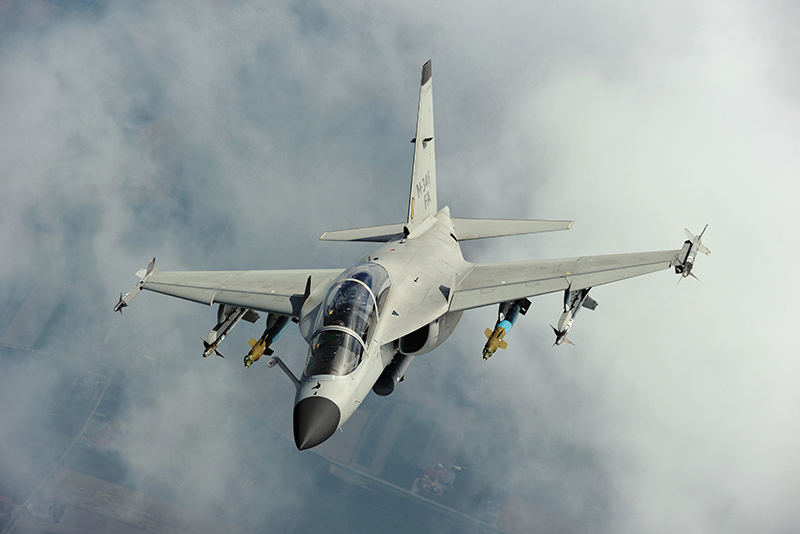 The M-346FA will be equipped with a DASS (Defensive Aid Sub System), which includes a Radar Warning Receiver (RWR), a chaff and flare dispenser as well as a Missile Approach Warning System (MAWS), with six sensors and a comprehensive 360 degree protection against any missile threat. The aircraft will be safely able to exchange in real time tactical data thanks to a dedicated Tactical Data Link (TDL) to NATO Link 16 or other standards.

A fundamental element of the FA configuration is the multimode GRIFO fire-control radar.   The GRIFO-346 is a pulse-doppler multimode radar, produced by Leonardo, specifically optimised for the M-346FA and originates from the Grifo family that, with over 450 units sold worldwide, is a great commercial success due to its reliability and low operational costs. The GRIFO family of radars recently evolved to the electronically scan Grifo-E version.

Eduardo Munhos, head of International Sales at Leonardo’s Aircraft Division said: “The maximum speed is remarkable even with external loads, is comparable with the speed of other front line aircraft, when loads and armament is added.”

The 4-channel digital fly-by-wire flight control system allows fast manoeuvring during close air combat. Excess power allows the aircraft to return to base even with full payload, with one engine inoperative (OEI), and at an altitude to keep it beyond the ranges of common missiles providing a notable survivability capability. So-called ‘carefree handling’ lets pilots focus on the prime mission without distractions.

Visibility is excellent and this is very important during low altitude flight. The back-seat pilot can also act as a weapons system operator or deliver a more specialised FAC-A (Forward Air Controller – Airborne) role.

The state-of-the-art Human-Machine Interface (HMI) includes advanced systems to provide data to the pilots through Multi-Function Display (MFD), Head Up Display (HUD) and the Helmet Mounted Display (HMD) which are already qualified. HOTAS (Hands On Throttle And Stick) type commands, allow control of all of the aircraft’s systems without having to take the hands off the thrust lever or the control bar.

“The M-346FA keeps all the advanced trainer’s features, such as the on board Embedded Tactical Training System (ETTS), that simulate, in a Live Virtual Constructive (LVC) environment, the entire suite of sensors and weapons of M-346FA and other front line fighters,” continued Munhos.

The FA’s new operational capabilities add on to those that the M-346 is already able to offer now, as an ‘aggressor’ and ‘companion trainer’ for combat ready pilot training, as the Israeli and Italian Air Forces have successfully demonstrated.

External stores that can be carried amount to over 1.8 tonnes in addition to the 138 gallons in each auxiliary fuel tank. For the strike missions a series of 227kg (500lb) class munitions, both guided and unguided will be integrated, including the latest generation precision munitions capable of keeping collateral damage to a minimum. Modern Laser Designator Pods are available for target designation.