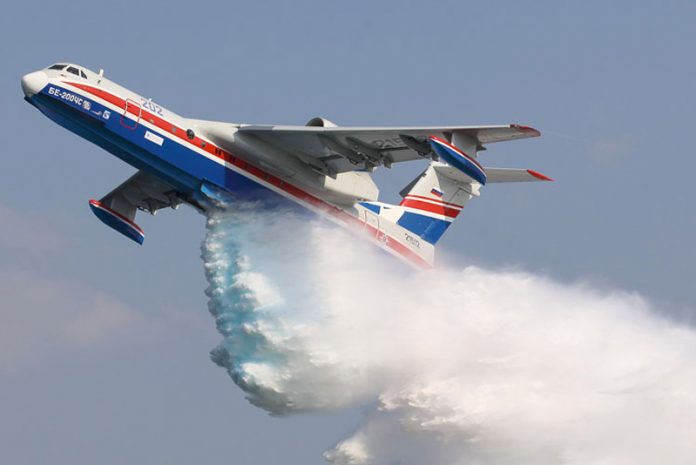 Two Russian Be-200ES amphibious aircraft have arrived in Turkey and from June 16 will begin work on suppressing the spread of forest wildfires in the Republic of Turkey.

The signing of the Forest fire-fighting service agreement and the aircraft deployment were organized by the United Aircraft Corporation (PJSC UAC powered by Rostec State Corporation) with the assistance of the Ministry of Industry and Trade of the Russian Federation, the  Ministry of Civil Defence, Emergencies and Disaster Relief of the Russian Federation and the active support of the State Corporation Rostec Representative Office in Ankara.

The request for help in controlling forest fires in the coming hot season came from Republic Of Turkey Ministry Of Agriculture And Forestry. Be-200 amphibious aircraft with Russian crews will be on duty ready to firefighting actions in the vicinity of Antalya, Izmir and Bodrum for 4 months.

Deputy Minister of Industry and Trade of the Russian Federation

«Today we see the first results of constructive cooperation between Russia and Turkey in the field of aviation. According to the results of the agreements between the countries, with the assistance of our Trade Representation in Turkey, which has been at the forefront of the negotiation process throughout the whole period, over the next 4 months we will be able to observe how the planes of the Taganrog Aviation Scientific-Technical Complex n.a. G.M. Beriev with Russian flight crews will help in the fighting against possible nature disasters in the vicinity of Antalya, Izmir and Bodrum. Russia has unique competencies in the aircraft industry, which allow creating unique aviation complexes. The Be-200 is an amphibious aircraft designed to save people, wildlife, and infrastructure objects. The mission of this multifunctional machine is to be at the forefront, to help in the most difficult situations. We are pleased that our Turkish partners will be able to fully appreciate the potential of this highly efficient technology» – stressed Deputy Minister of Industry and Trade of the Russian Federation Oleg Bocharov.

Director for International Cooperation and Regional Policy of Rostec

«The Be-200 is ideal for regions with a hot climate, as well as for working in hard-to-reach areas. It advertised itself while fighting wildfires not only in Russia, but also in many countries around the world, including France, Portugal, Italy, Greece, Indonesia, Israel. This year, we promptly gave a hand to our Turkish partners. Organizational issues were resolved as quickly as possible, thanks to the coordinated work of the Russian and local authorities, the representative office of the Rostec State Corporation in the Republic of Turkey.»-  noted Director for International Cooperation and Regional Policy of Rostec Victor Kladov.

«Russian Be-200 is an amphibious aircraft with unique characteristics and high efficiency. The aircraft proved itself during wildfire fighting and rescue operations in Europe and Southeast Asia. Be-200ES is an export-oriented product, it causes great interest among foreign customers. Joint work with Turkish partners shows that we can have good potential for the development of cooperation, including in the supply of aircraft in the interests of boosting the Turkish firefighting fleet, ”said Yury Slyusar, General Director of PJSC UAC.

The Be-200 amphibious aircraft was demonstrated during the MAKS-2019 air show, attended by Russian and Turkish leaders. In 2019 it took part in the flight program of the Teknofest-2019 Aerospace and Technology Festival in Istanbul, and after the end of the forum, Be-200 demonstrated its unique characteristics for real situations.

In 2019, the Turkish delegation led by the Minister of Agriculture and Forestry of the Republic of Turkey Bekir Pakdemirli and Ambassador Extraordinary and Plenipotentiary of the Republic of Turkey to the Russian Federation Mehmet Samsar visited PJSC “Beriev” (part of the UAC), checked out the manufacturing site where the Be-200 is assembled, a maintenance center and a flight simulator for pilots training.

Video of the Be-200ES flights and production can be seen here:

The Be-200ES is the only amphibious jet plane in the world, which gives undeniable advantages in speed when fighting fires. The Be-200 can hold up to 12 tons of water. The plane offers high fire-suppression capacity in terms of the number of water drops per hour. With an airfield-fire distance of 100 km and airfield-water body distance of 10 km, the airplane can drop up to 270 tons of water on the fire.

In 2003, the airplane was certified by IAC Aviation Register in accordance with AP-25 airworthiness requirements. In 2007, an addition to the type certificate was received, allowing the Be-200ES to be used to transport 43 passengers on medium-haul routes based on both airfields and water. An European Type Certificate EASA for the airplane was issued 2010.