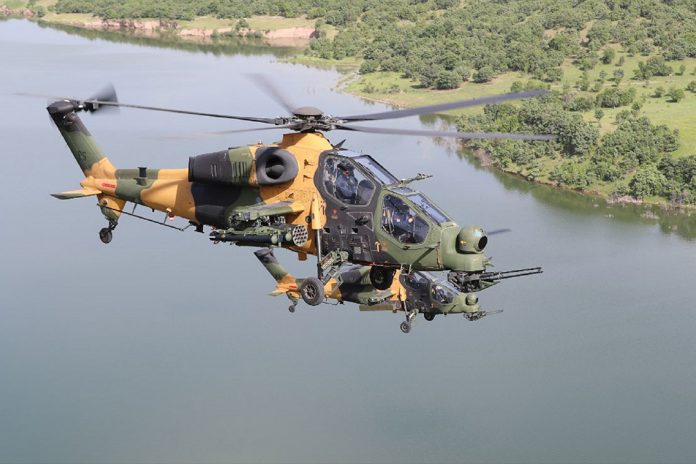 The Philippines has confirmed that it will be acquiring six Turkish Aerospace T129B ATAK helicopters for the Philippine Air Force (PAF), with deliveries expected to begin in the third quarter of this year, according to comments made by Defense Secretary Delfin Lorenzana to the state-owned Philippine News Agency (PNA).

According to Lorenzana, the Department of National Defense (DND) has earmarked around US$286.6 million for the attack helicopter programme and noted that the new helicopters will enhance the rotary-wing combat capabilities of the PAF, which currently uses the MD 520MG and AW109E Power helicopters to support ground and counter-insurgency operations.

DND spokesperson Arsenio Andolong said in a separate statement that the first two T129 helicopters are expected to be delivered in September, adding that the remaining aircraft will be delivered in batches of two in 2022 and 2023.

The PAF also announced on 22 May that it is sending pilots and maintenance crew of its 15 Strike Wing to undergo training in Ankara between late May and August.

Although the PAF’s technical working group had selected the tandem-seat, twin-engine T129B platform – originally produced under license from AgustaWestland (now Leonardo) and based on the A129 Mangusta – for its attack helicopter programme as far as late 2018. The sale of the helicopter had been delayed due to export restrictions on the US-made LHTEC CTS800-4A engines.

However, Turkish Aerospace officials told media in that the US State Department had cleared the sale of the engines and that production of the PAF helicopters would commence in the coming months.

In April 2020, the US Defense Security Cooperation Agency (DSCA) announced that the Philippines was cleared to acquire six of the Bell AH-1Z Viper or Boeing AH-64E Apache attack helicopters – including engines, weapons, parts, and training – worth a total of US$1.95 billion, although the country would only select one of the two offered platforms.

Local defence observers have noted that the high unit and operational costs of the US-made helicopters meant that the only realistic choice had always been the A129B.

Rosoboronexport to Bring Russian Military Equipment for All Services to Malaysia’s...