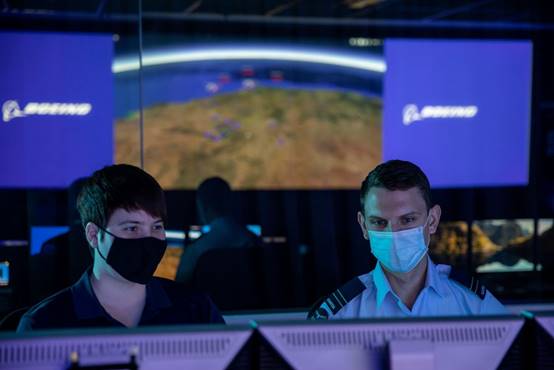 In a multi-day exercise that expanded upon a similar activity, RAAF operators worked with the digital twin to develop and test autonomous behaviours in operational scenarios and against threats provided by Defence.

“We are working closely with Boeing Australia on the integration of advanced payloads and operational requirements to ensure the Airpower Teaming System capability will be mission-ready to support air combat operations,” said Air Vice-Marshal Robert Denney, RAAF Head of Air Force Capability. “The state-of-the-art digital twin concept is allowing us to evaluate and integrate smart human-machine teaming systems in our force structure.”

Testing included validation of the teaming aircraft integration and payloads as they operated alongside Defence crewed platforms, as well as the effectiveness of the distributed sensors across the Airpower Teaming System uncrewed team. The test scenario involved several aircraft operating in a threat environment, executing mission aims in co-ordination with crewed aircraft being operated by RAAF personnel, and builds on work to develop the crewed-uncrewed interface during earlier activities.

This work also contributes to the development of the Boeing Airpower Teaming System being offered to global customers.

“Our digital engineering expertise has enabled us to accelerate the Airpower Teaming System’s product lifecycle development of the aircraft design through to production,” said Brad Thompson, Airpower Teaming System Chief Capability Architect. “Creating the digital environment has also enabled us to test the mission systems code in a realistic operational environment so we can rapidly iterate our crewed/uncrewed teaming concepts and payload implementation to meet the threat environment.”

“Taking a digital twin approach delivers an agile, cost effective test program to keep pace with the future battlespace, and we’re well along the path to drive towards initial operational capability.”

Progress on the Airpower Teaming System’s mission system and payload development has included ground-based hardware and software in-the-loop testing, followed by surrogate flight testing of the on-board systems to support verification of the digital models.

“We’re excited to test elements of payloads against appropriately spectrally representative targets in field trials,” Thompson said. “This enables us to rapidly roll in lessons learned into our digital environment to accelerate development towards an operational capability.”

A digital twin of the entire aircraft has been ‘flown’ thousands of times under different battlespace effects to test aircraft performance and maximize its deployment capability independently and in support of other aircraft.

Boeing will continue to progress payload development and flight tests under the development program.