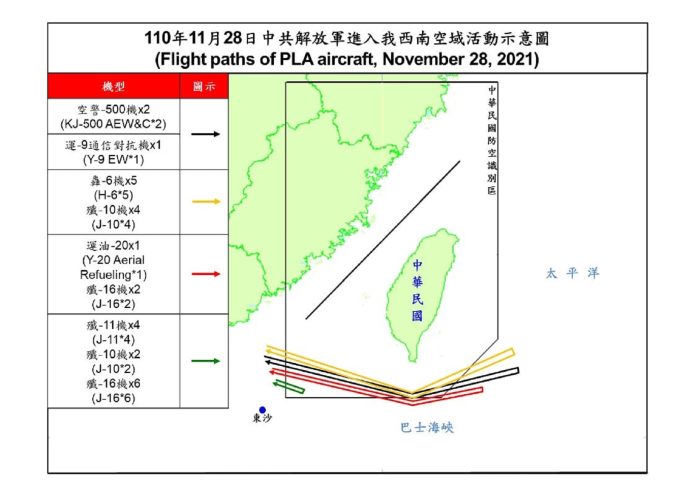 Taiwan’s defence ministry announced on 28 November that the Republic of China Air Force (RoCAF) had scrambled its fighter jets to warn off a flight of 27 People’s Liberation Army Air Force (PLAAF) aircraft off its southern air defence identification zone (ADIZ), while also deploying its missile defences as a precaution.

However, it was the aerial refuelling variant of the Xi’an Aircraft Corporation Y-20A transport aircraft – designated the Y-20U – that caught international attention because of its air-to-air-refuelling capability as well as the occasion of its public debut in international airspace.

Photographs and video footage posted around the same day on the Chinese Weibo social media channels, confirming that the new variant has entered service with the PLAAF.

Video footage showed a Y-20U aerial tanker in flight featuring low-visibility PLAAF markings as well as serial number 20241, indication that the type is being operated by the 13th Transport Division of the 37th Air Regiment at Kaifeng.

Based on visual analysis, the Y-20U is fitted with three hose-and-drogue refuelling pods with two mounted under the outer wings and the third on the rear fuselage. It also features a redesigned main landing gear sponson likely aimed at enhancing receiver stability during fuel transfer operations.

The Y-20U is a second generation aerial tanker and is expected to become PLAAF’s mainstay aerial refueller, gradually replacing the service’s increasingly obsolescent H-6U and Ilyushin Il-78M platforms. The Y-20U is expected to provide support to the latest aircraft being fielded by the PLAAF, including the J-20 stealth fighter, the H-6N strategic bomber, and the KJ-500 AEW aircraft.