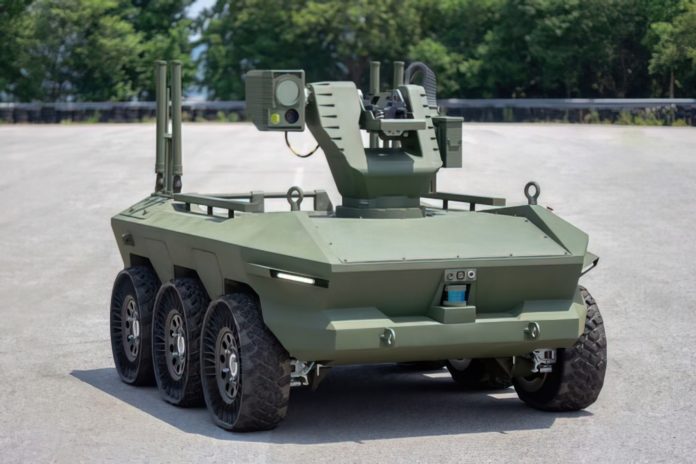 Hyundai Rotem said the two Multi-Purpose UGVs (MPUGVs) were delivered to the service following six months of evaluation by the Defense Acquisition Program Administration (DAPA) and the RoKA, with extensive testing of its autonomous and remote-driving capabilities performed in various environments and terrain as well as operations along the Demilitarised Zone (DMZ).

DAPA selected Hyundai Rotem in November 2020 to develop the MPUGVs under a US$3.6 million contract, which included associated training and support. Two prototype UGVs were handed over to the agency in July 2021.

While technical specifications of the MPUGV were not disclosed, the company said in a statement that the new vehicle is derived from its HR-Sherpa platform and offers more performance to undertake a wider variety of roles, including in close combat support, reconnaissance and surveillance, as well as ammunition and expendables resupply and casualty evacuation missions.

The baseline HR-Sherpa is powered by on-board batteries measures 2.7 m in length, 1.7 m in width, and 0.9 m in height, weighing around 1,600 kg unloaded. It can carry up to 400 kg in mission equipment or stores. The HR-Sherpa also offers a claimed endurance of up to six hours when cruising at 5 km/h, although it can attain maximum road and cross-country speeds of up to 40 km/h and 10 km/h, respectively.

In contrast, the MPUGV is equipped with a small remote weapon station that can be armed with a light or heavy machine gun. A gunfire locating system is mounted on the vehicle that detects and triangulates gunshots and automatically slew the RWS towards potential threats.

The vehicle can turn on its axis and features an integrated heat management system that enables it to perform long-range travel in austere conditions. Each of its six wheels are equipped with in-hub electric motors that provide independent propulsion, while airless tyres enhance its survivability against battle and terrain damage.

Hyundai Rotem also noted that the MPUGVs feature day-and-night cameras that provide real-time images to the operator and support various modes of operation, including leader-follower, tele-operation, and waypoint-based semi-autonomous navigation.