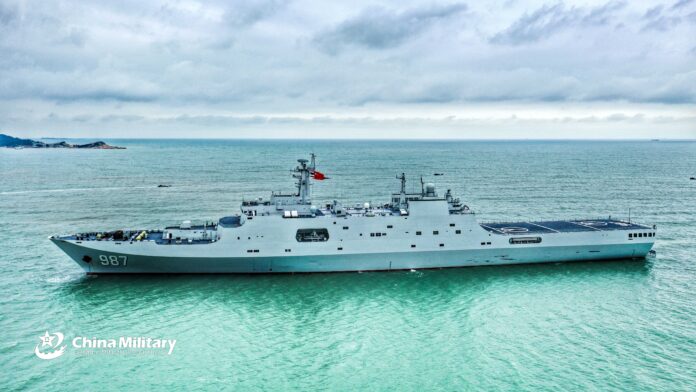 China has on 31 January dispatched two naval vessels to the disaster-hit Tonga as it expands its humanitarian assistance and disaster relief (HADR) efforts to the South Pacific country, following a massive eruption of an underwater volcano that caused a tsunami which devastated its smaller outer islands and cut commercial air transport links.

Both vessels are carrying over 1,400 tonnes of relief supplies including food, and medical equipment, building material, generators, tractors, as well as water pumps and purifiers. Wuzhishan is also carrying medical personnel who will assist in healthcare operations.

Meanwhile, the Royal Australian Navy’s (RAN’s) Canberra-class landing helicopter dock (LHD) HMAS Adelaide suffered a Covid-19 outbreak during transit from Brisbane to Tonga, with its commander asserting to media that affected personnel being supported while in medical care in a dedicated quarantine zone aboard.

Adelaide was allowed to dock and offload its humanitarian aid supplies without contact with the local populace, but the ship suffered yet another mishap when on-board electrical power was lost while berthed.

ABC News reported that the ship was “stranded for a period of time because of a total power failure”, including its back up power, and that personnel were “sleeping above deck” due to the lack of air conditioning aboard.

The report prompted the Australian Department of Defence (DoD) to issue a 31 January statement to refute “incorrect reports” on Adelaide, which noted that back-up power has been activated to restore essential systems such as refrigeration and sanitation systems. The DoD also stated that air conditioning is “operational in most areas of the ship”.

“The power outage has not affected Australia’s ability to support requests from the Government of Tonga to assist their recovery efforts,” said the DoD. “Civilian specialists are on route to conduct an assessment of the affected systems.”