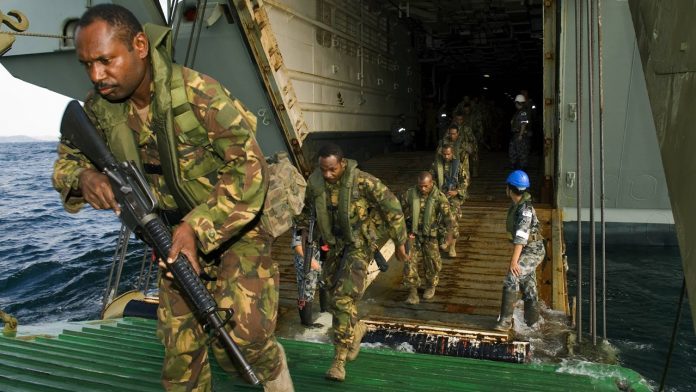 Brigadier General Gilbert Toropo, commander of the Papua New Guinea Defence Force (PNGDF), talk to asianmilitaryreview.com about the state of PNGDF capabilities in the run-up to next year’s national and local elections.

The PNGDF, which contains a land, air and naval element under a single command, plays a key role in supporting the national police force, the Royal Papua New Guinea Constabulary (RPNGC), in maintaining security in the country. The capabilities, such as Bell 212 light utility helicopters and ‘Balikpapan’ landing craft for example, that the PNGDF has at its disposal far surpass those of the RPNGC. This makes it possible to ensure security in remote areas of the country during significant events such as next year’s elections.

Currently, the PNGDF operates two 212 helicopters, which are leased from the Australian Government. According to Brig. Gen. Toropo: “Helicopters are a key capability on an island where the lack of road infrastructure makes mountainous areas particularly difficult to reach”. A Public Private Partnership (PPP) is being set-up with a private helicopter company to acquire more helicopters and secure PNDGF personnel training for five years. The name of the company and the details of the contract, however, cannot be disclosed for confidential reasons.

Finally, Brig. Gen. Toropo states that: “There is a big requirement to upgrade our capabilities … but the big challenge is the uncertainty of funding.” For example, according to the Stockholm International Peace Research Institute, Papua New Guinea performed $112 million in 2014 on military expenditure, although this declined to $100 million in 2015.