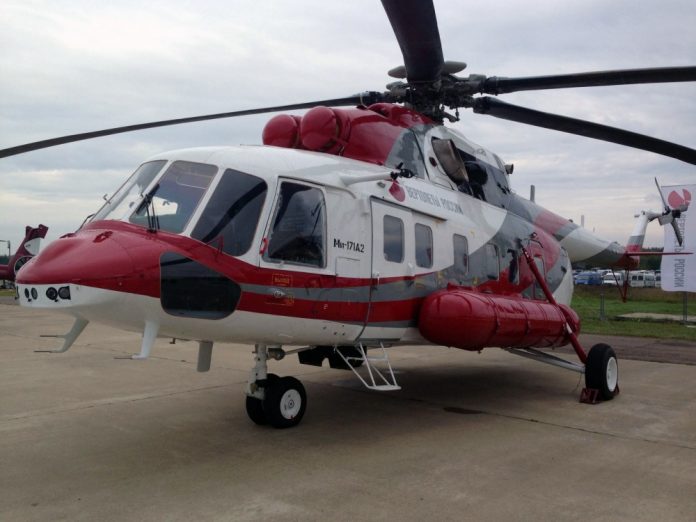 Russian Helicopters Holding Company (part of Rostec State Corporation) obtained a type certificate for medium utility Mi-171A2 helicopter in a convertible configuration from the Federal Air Transport Agency of the Russian Federation (Rosaviatsia). This document opens the door for helicopter deliveries to commercial customers. Today the helicopter will be demonstrated to Dmitry Rogozin, Vice Prime Minister, during his scheduled visit at Ulan-Ude Aviation Plant.

The type certificate certifies that the Mi-171A2 developed at Moscow Mil Helicopter Plant may safely transport passengers and cargoes day and night in standard and adverse weather conditions, including over water areas both as per VFR and IFR. Moreover, the document proves that the helicopter may be operated along international air routes. The certification opens the way to serial production and deliveries of Mi-171A2 helicopters to Russian and foreign customers.

The Mi-171A2 has been certified as per category A, which stipulates meeting the most stringent safety requirements imposed on civil helicopters. In particular, one of the requirements is the possibility to continue OEI flight with the maximum take-off weight.

“Obtaining a type certificate is one of the most important events of the project and means the opportunity to deliver this helicopter to commercial operators. The Mi-171A2 offers ample opportunities to renew helicopter fleet of Russian and foreign operators, who have experience in operating Mi-8/Mi-17 helicopters,” – Andrey Boginsky, Director General of Russian Helicopters Holding Company, emphasized.

Performed activities resulted in completion of tests in six programs with drawing up certificates of additional certification tests. In addition, during MAKS-2017 the helicopter performed eight demonstration flights simultaneously with the test program.

The Mi-171A2 is the result of a radical modernization of worldwide known Mi-8/Mi-17 helicopters.  When developing the Mi-171A2, the goal was to reduce helicopter operation costs, improve its performance and bring them in line with tight modern airworthiness standards applied to civil aircraft. More than 80 changes were introduced to the Mi-171A2 design as compared to the baseline model. The helicopter is powered by VK-2500PS-03 engines (civil version of the engines installed on Mi-28 combat helicopters) with FADEC system. The transmission was reinforced due to the engine power increase. Digital navigation system with data display indication allowed reducing the crew to two people. Introduction of HUMS into avionics improved helicopter safety and made it possible to reduce its maintenance time.

A new rotor system is the one of the most important distinctive features of the Mi-171A2 as compared to Mi-8/Mi-17 helicopters. The helicopter is equipped with a more efficient X-shape tail rotor and a new main rotor with all-composite blades of improved aerodynamic design. Therefore, aerodynamics alone contributed to the increase of the Mi-171A2 main rotor thrust more than by 700 kg, which improved the whole range of flight and technical performance. Mi-171A2 helicopter entered serial production at Ulan-Ude Aviation Plant.