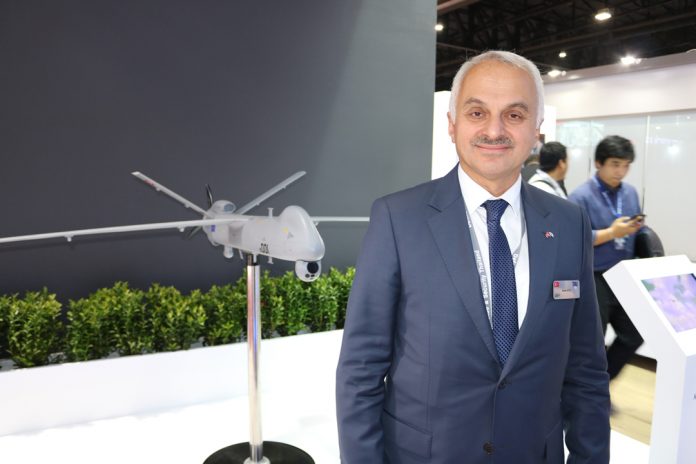 Temel Kotil is an aeronautical engineer and served as the general manager and CEO of the Turkish Airlines from April 2005 before joining Turkish Aerospace Industries (TAI) earlier this year. He graduated in Aeronautical Engineering from Istanbul Technical University with a B.Sc degree in 1983 and is bringing that expertise to his new position as president and CEO of TAI.

Mr. Kotil said that his company’s focus at Defense & Security 2017 is to promote TAI’s extensive range of aircraft, both manned and unmanned, to the regional market. The TAI Anka is a family of unmanned aerial vehicles (UAVs) designed for the requirements of the Turkish Armed Forces. The 1.5-ton Anka-A is classified as a Medium Altitude Long Endurance (MALE) UAV capable of carrying two payloads for ISTAR missions and a Aselsan AselFLIR 300T radar for 24 hours at an altitude of over 30,000ft (9,000m).

“With many countries in the Asian region made up of large number of small islands, there is a heavy requirement for high performance UAVs,” said Mr Kotil. “ The Anka sensors are so good that they can spot fish jumping out of the sea.”

The other aircraft that TAI believes are ideal platforms for the region is the Hurkus, a tandem two-seat turboprop aircraft being built as a primary and basic trainer aircraft, which is already in production for the Turkish Air Force, and as counter insurgency attack aircraft which will be available next year. Mr Kotil also confirmed that an advanced twin-engine MALE is also under development.

The third aircraft with excellent sales prospects in the region is the T129 ATAK combat helicopter that was developed by TAI in partnership with AgustaWestland, now Leonardo.

The ATAK, for which TAI has worldwide marketing rights, is now being delivered at the rate of two a month to the Turkish Land Forces. Mr. Kotil told the Show Daily that it has been demonstrated to the Pakistan Army and he was confident that it is exactly what they need due to its hot and high performance. Mr Kotil added, “The ATAK is not the largest or strongest combat helicopter, but its advanced cockpit and weapons systems, and lightweight but strong construction with the extensive use of composites makes it ideal for customers such as Pakistan. It has already been flown at 14,000ft (4,200m) in 50 degrees C.” Production could be increased to three per month if required.

Temel Kotil said that he was born is mountainous region of Turkey and is used to scaling peaks. He has a challenging range of new products that TAI will be developing in the next few years. They include the T625 twin-engined light transport/utility helicopter, a 10-ton 20-seat twin-engined helicopter with a rear ramp powered by indigenous 1,400shp turbine engines now under development, an Apache-class heavy combat helicopter and the HurkusJet advanced jet trainer designed to replace the Turkish Air Force’s T-38 Talons. The Mach 1.2 AJT will be produced again with extensive use of advanced composite materials.

Mr Kotil’s latest challenge is the development of an indigenous 5th Generation twin-engine all-weather aerial superiority fighter aircraft, the F-X which will be developed in collaboration with BAE Systems. “We already have a team from BAE Systems working with us in Turkey and on 2 June 2018 we will be selecting a partner for the engines that will be more powerful than those now in production.”