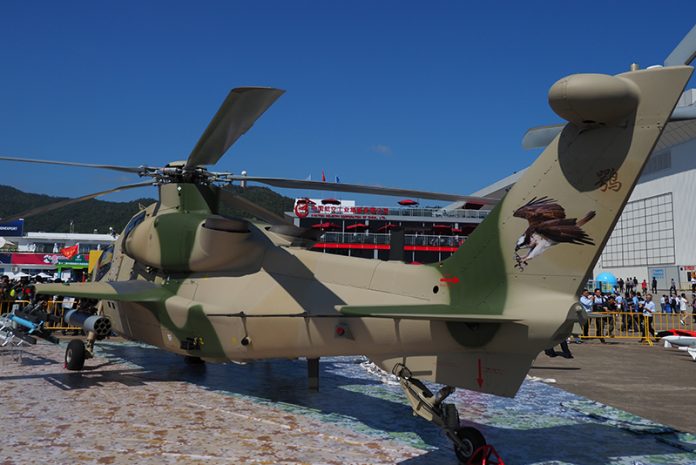 The Aviation Industry Corporation of China (AVIC) is hopeful it will have a second chance to win a contract to supply the Pakistani Army with its upgraded Z-10ME attack helicopter, company officials said on the sidelines of the Airshow China exhibition in Zhuhai.

The company had earlier dispatched three army aviation Z-10s to Pakistan for testing by the army in 2016. However, the service eventually selected the Turkish Aerospace Industries (TAI) T129 ATAK attack helicopters because the Z-10s reportedly did not meet performance and reliability requirements for austere environments.

AVIC subsidiary Changhe Aircraft Industries Corporation (CAIC) then went back to the drawing board with detailed test data accumulated from in-country testing and rolled out the new Z-10ME, which is believed to feature a more powerful 1,200kW engine as well as an extensive active and passive defensive aide suite.

These include a new missile approach warning system (MAWS) and radar warning receiver (RWR), revised and upturned engine nozzles to channel hot exhaust gases upwards to reduce the helicopter’s infrared signature. It will also have dust filters for the twin intakes to reduce power loss from sand and particulate contamination of the engine.

The Z-10ME is also outfitted with appliqué armour panels attached to the fuselage just immediately under, and slightly forward of, both cockpit’s side windows to improve crew survivability from ground fire.

With the US government cancelling $300 million worth of funding and equipment that had earlier been approved under the Coalition Support Fund and Foreign Military Financing schemes, Pakistan’s plan to acquire 30 T129 and 12 US-made Bell AH-1Z Viper attack helicopters is now in question. As a result, there could be a window of opportunity for China to initiate anther push to export the Z-10 to Pakistan.