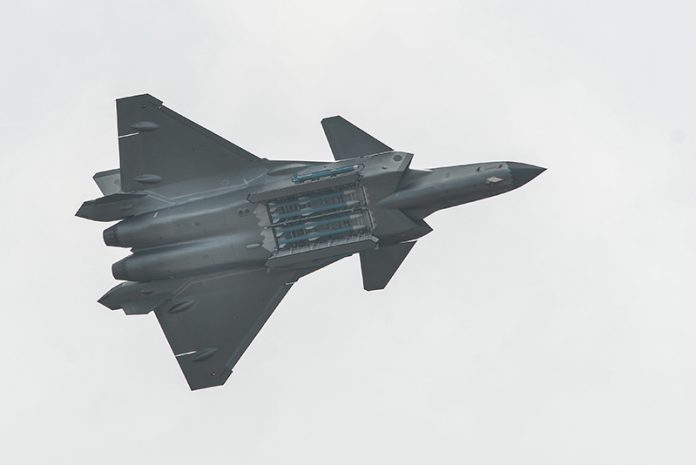 Some sources suggested that this milestone occurred exactly eight years and one day after the first of eight prototypes completed its maiden flight (which was made on 11 January 2011), while others gave the date as 13 January 2019.

Two aircraft were officially delivered to the 9th Fighter Squadron, now part of the 9th Brigade at Wuhu, which otherwise operates the Sukhoi Su-30MKK. It was formerly the 9th Regiment of the 3rd Fighter Division. Wuhu airbase is located about 200km from the coast, and Japan, South Korea and Taiwan all lie within the aircraft’s claimed radius of action. Some reports suggest that the first J-20s were delivered to Wuhu in October 2018, presumably for familiarisation and training.

The first low rate initial production (LRIP) version was completed in December 2015, and the first two LRIP J-20s were handed over to PLAAF on 12 December 2016. At least seven aircraft were allocated to the Flight Test & Training Base at Dingxin.

Air Force J-20 pilot training began in March 2017, and the type officially entered service in September 2017, when combat training began. J-20s were delivered to a Flight Test & Training Base at Cangzhou – whose aircraft are used for advanced training and tactical development, as well as forming a strategic reserve. The aircraft displayed at Zhuhai came from Cangzhou.

Chinese media report that an upgraded version of the J-20 will have “overwhelming superiority” to the F-35.