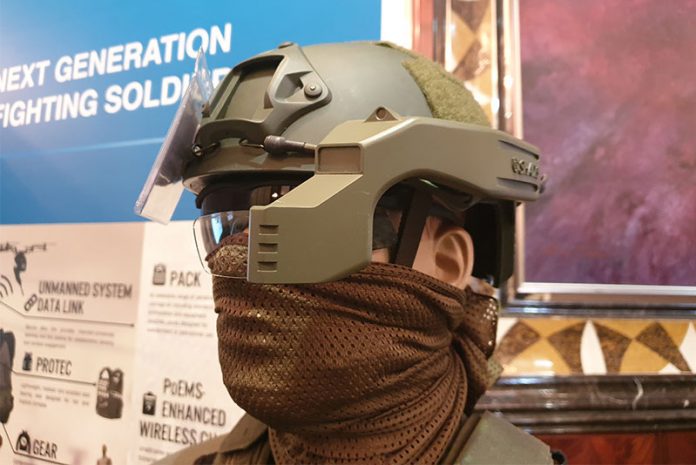 Under development by the company’s Soldier System Development Group, the ensemble made its public debut at the 2014 Singapore Airshow and has grown in both comprehensiveness and sophistication.

The ARCTIC is a wearable, self-monitoring cooling system that utilises a solid-state cooling plate that does not contain moving parts, pipes, or refrigerant, and is claimed to be capable of reducing the soldier’s core body temperature by up to 15 percent at an ambient temperature of 40°C.

Situational awareness is enhanced with the Shielded Advanced Eyewear System (SHADES), which is designed highlight objects of interest for identification or tracking and is also envisioned to be capable of controlling and exploiting information from other tactical assets such as unmanned aerial and ground vehicles (UAVs and UGVs), and unattended sensors. Future capabilities for SHADES include the Brain Control Interface (BCI), which processes the soldier’s brainwaves to directly control small unmanned platforms.

Meanwhile, the Soldier Enhanced Sensing Equipment (SENSE) system is a real-time health-tracking device which monitors the soldier’s vital signs such as the heart and respiratory rate, stress levels, as well as skin temperature. It is designed to detect the symptoms of distress from exhaustion and relay this information to a wearable smart interface carried by a squad leader. SENSE also stores the data for post-mission analysis.

Other recent additions to ARIELE include the Garment Engineered by Advanced Research (GEAR) combat clothing, which employs lightweight and breathable materials aimed at providing optimal comfort for tropical and hot climates; the Pouches and Carriage Kit (PACK), which is designed to backpacks of up to 125 litres in volume and optimised for the anthropometric characteristics of Asian troops with a discrete frame designed to move in synchronisation with a soldier’s back; and the Sole-stitched Tropical Improved Design (STRIDE) boots that provide improved ergonomics, grip, and resistance to water ingress.

The development team has also introduced the Exosuit, which is an unpowered, lightweight exoskeleton that is designed to enable troops to carry heavier loads over longer distances with reduced fatigue, while improving safety. The Exosuit can support up to 80 percent of the soldier’s load in standing or kneeling positions by transferring weight through the frame of the exoskeleton to the ground, and exploits the kinetic energy generated by its wearer to maintain efficient kinetic movement.