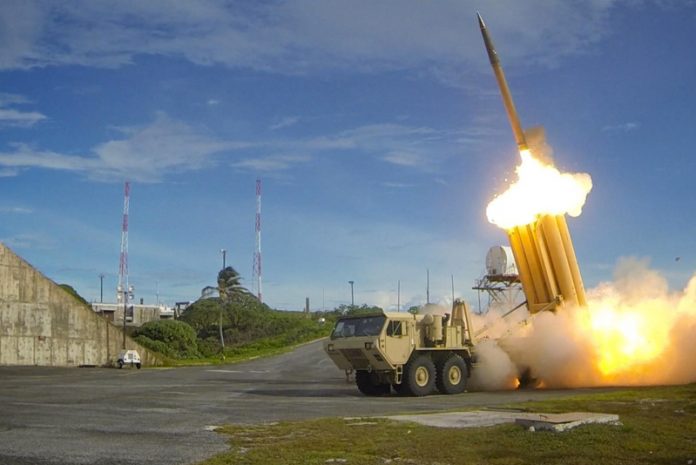 Obtaining a ballistic missile defence capability adds another layer to a nation’s nuclear and/or conventional deterrence.

On 30 August at Kwajalein Atoll in the Marshall Islands, Lockheed Martin’s tested its Terminal High Altitude Area Defense (THAAD) system by intercepting a medium-range ballistic missile (MRBM) target. It successfully detected and tracked the incoming missile before firing a missile to intercept the intruder after developing a fire control solution. The missile was launched from a remotely located site.

According to Richard McDaniel, vice president of Upper Tier Integrated Air and Missile Defense Systems at Lockheed Martin, “the test paves the way for delivery of an urgent need capability that will enhance THAAD’s emplacement options resulting in greater asset protection.”

This was the 16th successful intercept in 16 attempts for the THAAD system since 2005.

Countries including the United States, Russia, China and India  all either have, or are looking at obtaining,  sophisticated ballistic missile detection and defence systems, which can not only  counter threats from ballistic missiles but also counter cruise missile systems.

The United States has developed both THAAD and Patriot-3 systems as components of its Global Protection against Limited Strikes (GPALS). Back in 2000, the cost estimates for just these two programmes was $12 billion. Earlier this year the United States fielded THAAD into Israel. it has also deployed the THAAD system into South Korea in March 2017. it has also been deployed to Romania and Guam. The US has also offered it for purchase to India as an alternative to Russia’s S-400 system.

In January 2018, Lockheed Martin secured an additional order of $459 million from the US Missile Defence Agency (MDA) to develop THAAD bringing the overall total invested to $1.28 billion with funding provided in 2017 and 2018.

The estimated range of THAAD missiles is 125 miles (200 km), up to an altitude of 93 miles (150km) although exact figures are still classified. A complete THAAD battery will have around six launch vehicles, each with eight missiles, two mobile tactical operations centres (TOCs) and the AN/TPY-2 ground-based radar (GBR). This is a long-range, very high-altitude active electronically scanned array (AESA) radar provided by Raytheon which has a range up to 2,900 miles (4,700km).

The AN/TPY radar operates in the X-band of the electromagnetic spectrum enabling it to see targets more clearly. The radar is capable of detecting ballistic missiles as they rise, and also can guide interceptors toward a descending warhead.

South Korea not only is fielding the US THAAD, but is also working on its indigenous Korean Air and Missile Defence System (KAMD) in which it plans to defeat enemy missile systems through a ‘kill chain’. South Korea already operates the PAC-2 and more advanced PAC-3 systems as a part of its lower altitude interception along with its Medium Range Surface-to-Air (M-SAM) missiles. The M-SAM costs $800million while $1billion has already been devoted to the development of the L-SAM. The L-SAM reportedly would have the ‘high divert’ maneuvering system. South Korea has also expressed interest to buy ship based SM-3 interceptors. All these systems would provide South Korea a multi layered defence capability capable with versatile launch pads.

The United States is also developing the Aegis Ashore defence system for the naval defence capability. In August 2019, the US Navy awarded Lockheed Martin a contract valued at $80million for electronic equipment upgrades to the Aegis Modernisation Program. The US is also developing land based variant called Aegis Ashore and a sale to Japan has already been approved by the US Defense Security Cooperation Agency which cleared the purchase of a pair of land-based Aegis ballistic missile defense systems at a cost of around $2.15 billion. The system will be capable of intercepting both ballistic and cruise missiles and the deal to Japan included not just the defence system but sub-systems too.

Australia is also working on missile defence capability owing to the threat from North Korea and China. Australia is seeking to develop an Integrated Air and Missile Defence (IAMD) and multi domain battle management system that would require the amalgamation of over the horizon (OTH) radar technologies, sensor suites and distributed networks. Australia’s Jindalee OTH radar supports ballistic missile defence operations and its normal operating range is 1000km-3000kms. At present, BAE Systems is conducting an upgrade programme of the Jindalee OTHR that will take ten years to complete.

China has progressed with Anti-Satellite (A-SAT) tests, with results leading across to ballistic missile defence. it is however acquiring the Russian S-400 Triumf under a $4 billion deal. However the first shipment was reportedly damaged en route in the English Channel and had to be replaced. According to Russia’s director of the Federal Service for Military-Technical Cooperation, Dmitry Shugayev, the delivery of the S-400s to China would now be completed by the end of 2020

The air and missile defence system is ground based and can shoot down targets at distance of 600kms away and at an altitude of up to 27 kilometres. It reportedly can simultaneously engage 36 targets, and is viewed to be one of the most sophisticated air and missile defence systems. China is also working on counter-space capabilities that include ground laser weapons to destroy space based sensors.

China’s A-SAT capabilities could be used as space-based interceptors though the task of destroying satellites is far less complex than ballistic missiles. The China Precision Machinery Import and Export Corporation (CPMIEC) has developed the FD-2000 – the HQ-9 versions of air and missile defence system that can intercept aircraft, helicopters, unmanned aerial vehicles (UAVs) and also cruise missiles. It has a two level command and control capability that could also control and command other air defence systems turning it into a layered defence system. The system can allegedly hit targets up to a range of 200kms and altitudes of 30,000metres. Though its single shot kill probability is low against ballistic missiles as compared to aircraft, the fact that the system possesses the capability, enhances its deterrence value against the ballistic missiles of adversaries.

The HQ-9 versions of defence systems are both ground-based and naval based (HHQ-9 and HHQ-9A) and are broadly equivalent to the Russian S-300 air and missile defence systems. The HQ-19, an upgraded version of the HQ-9 is reportedly a Chinese version of the US THAAD system. Beijing is also working on sea-based anti-missile system as a ‘deterrence by denial’ option in the South China Sea. The cost and progress of development of the system is not yet know.

India too has developed ballistic missile defence capabilities under the guidance of the Defence Research and Development Organisation (DRDO). It is a two tier missile defence system – the Prithvi Defence Vehicle for intercepting targets in exa-atmosphere and Advance Air Defence System for intercepting targets at endo-atmosphere. India is also set to acquire the S-400 Triumf from Russia at a cost of $5.43 billion in which it will acquire five such defence systems, although the US has proposed a counter-offer to sell PAC-3 and THAAD systems as an alternative.

Intelligence Takes a Back Seat