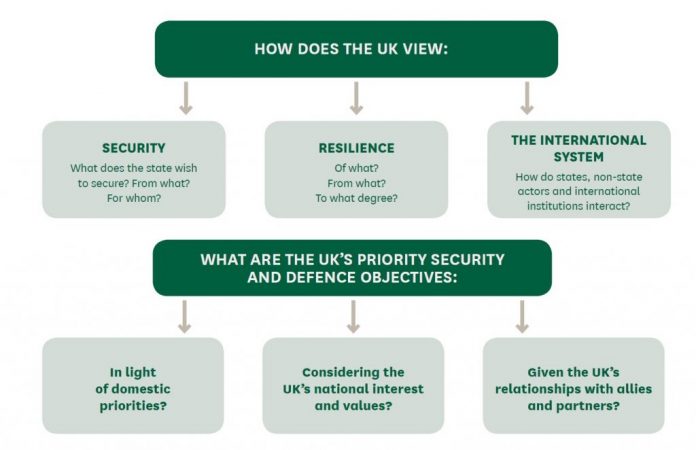 “This Officer reminds me very much of a gyroscope – always spinning around at a frantic pace, but not really going anywhere.” – Apocryphal Officer Fitness Report.

This week on Tuesday the British government will release its Integrated Review of Security, Defence, Development and Foreign Policy followed on 22 March by the Defence White Paper.

Chief of the Defence Staff General Sir Nick Carter agreed to stay on until November 2021 to help implement the Integrated Review which he has helped to shape.

The challenge to the UK and most nations with mature defence forces is to accelerate the transition from the traditional heavy formation and platform centric forces that have largely prosecuted kinetic linear or asymmetric warfare, into those that are more technology centric that offer a much wider scope of threat prosecution. We have witnessed the rapid escalation of cyber warfare, the rise of artificial intelligence, and big data driven intelligence networking that can halt an ‘iron’ based army in its tracks.

The mantra is always to prepare for the next war, not the last. This seems to suggest that large scale force manoeuvring such as during Operation Desert Storm in Iraq around 30 years ago should be a thing of the past. However, potential adversaries such as Russia and China still have very large traditional ground forces. Whether it is unlikely that individual states such as the UK would engage now or in the future in a peer conflict with such states alone seems highly unlikely.

International kinetic conflict is now discussed in military circles as something that would happen with “allies and partners”. However, the self-protection from cyber attack is more likely to be the responsibility of individual states at the outset.

It is now beyond the budget of most states to fund large ‘all arms’ kinetic forces as well as meeting the next generational challenges of space based defence, cyber, smart technology and so on.

Hitting the balance between retaining enough of the older style force that may be required for smaller scale conflicts, or larger joint operations with “allies and partners”, and building the transformative high technology capacity for today’s and tomorrow’s strategic conflict – all while balancing the budget – is a challenge indeed.

Another set of pictures for you to ponder once more. Again no prizes, but the answers are at the end of this email.

US ARMY AI&SE MODERNISES PLANS TO GATHER AND DISSEMINATE INTELLIGENCE

“The strategic environment has never been more complexed or harder to assess,” said Lieutenant General Laura A. Potter, deputy chief of Staff, G-2, US Army, during the virtual AUSA Noon Briefing on Wednesday 10 March.

While Russia and China remain as persistent challenges, Gen Potter stressed that China’s modernisation plans projected through the 20s, 30s and 40s would lead it to a position of strength as a world power. In addition, she said that extremism would remain as a long and enduring challenge.

Gen Potter added that many factors including the pandemic, climate change, natural disasters as well as transnational crime and information warfare (including cyber disinformation) was adding to the global fragility of some states: “Country’s we think are stable will trend towards fragility if we are not careful.”

The role the Army Intelligence & Security Enterprise (AI&SE) was to support the Army in “competition, crisis and conflict”, she said. The solution for this task was to build military intelligence (MI) teams that could operate across all disciplines and that could actively inform military decision makers in their own region, not just centrally.

The task ahead was huge: “Think of volumes of data [that will be generated] by 2035 and the speed of analysis [that would be required].” Machine learning would be needed to help analysts understand the vast quantity of data, much of it open source. She added that studies were being conducted with the Defense Advanced Research Projects Agency DARPA to develop a capability “to train algorithms that will change as the enemy’s tactics, techniques and procedures (TTPs) change.”

Working with ‘allies and partners’ would be important, and needed not only policies built on political agreements, but the technology to be able to securely share data. Personal interaction (HUMINT) was also needed to share information and build up trust (including building additional relationships outside those already established such as NATO and the Five Eyes (Australia, Canada, New Zealand, the United Kingdom, and the United States).

“The intelligence community must be embedded in ‘the competition space’ across all theatres,” stated Gen Potter. This would enable regional commanders to quickly gain situational understanding, absorb important indications and warnings of situational change, expand their own ‘competitive space’ when the opportunity arose, leading to improved decision dominance.

This picture is challenged when forces rotate into and out of each theatre of operations, but the MI picture should be managed “to make sure Army units can fall into theatre intelligence scenes; it is a multi-echelon approach but need to be in each operating space.”

To this end, Gen Potter stated that the AI&SE was “in the process of building divisional IEW battalions. This will give [each] commander the ability to holistically see across the intelligence and EW environments.”

Command and control that can be unified across all domain is something that all of the services are looking into, so that any response selected (from whichever source) in response to each requirement will be delivered for the best effect. “For this we need open architectures – bringing in systems that will take us into the 40s-60s” she stated.

US SECRETARIES ON MISSION TO SHORE-UP KEY INDO-PACIFIC ALLIANCES

The United States is moving to ‘shore up’ and perhaps revitalise its relations with strategic allies in the Indo-Pacific by sending Secretary of State Anthony Blinken and Secretary of Defense Lloyd Austin III to Japan and South Korea.

The trip is being touted by the Biden Administration as a demonstration that diplomacy is back on the agenda. A wide range of topics are set to be discussed including the strategic expansion of China and the enduring threat from North Korea. But the battle against COVID-19 and responses to climate change will also be discussed.

Perhaps both secretaries will also try to mediate on long running issues between Japan and South Korea, not least the suspension of the General Security of Military Information Agreement (GSOMIA) over intelligence sharing on North Korea.

Following the visit to South Korea, Sec Austin will travel onwards to India to a planned meeting with Indian Defense Minister Rajnath Singh. No doubt recent border clashes between the Indian Army and Chinese forces will be on the agenda, as will India’s relationships with Pakistan and Afghanistan.

11 March
US NAVY
Lockheed Martin Space is being awarded a $1.5 billion modification contract for the design, development, build and integration of equipment for missile flight test demonstrations and fielding. The total cumulative face value of the contract is $2.8 billion. Strategic Systems Programs is the contracting activity.

Sikorsky Aircraft is awarded a $155 million modification contract which exercises an option to provide long lead parts and components in support of nine Lot Six CH-53K aircraft. The Naval Air Systems Command is the contracting activity.

9 March
US AIR FORCE
United Launch Services has been awarded $224 million task orders under the National Security Space Launch Phase 2 contract. These task orders provide the basic launch services and mission integration for USSF-112 and USSF-87. The Space and Missile Systems Center is the contracting activity.

Intuitive Research and Technology was awarded a $9 million modification contract to provide rapid-response and cost-effective hardware solutions for Department of Defense and other federal departments and agencies. Fiscal 2021 Foreign Military Sales (Egypt); and research, development, test and evaluation (Army) funds in the amount of $9 million were obligated at the time of the award. US Army Contracting Command is the contracting activity.

1) A concrete acoustic mirror, one of several built on the south and northeast coasts of England between 1916 and 1933, Initially developed to detect the sound of incoming German Zeppelin raiders during World War One, embedded microphones could give a warning of around 15 minutes of an approaching raider around 15 miles away. Later microphones increased the range but these devices had been replaced by the ‘chain home’ radar network by World War Two.

2) A gun turret on the French Maginot Line, part of the Fortified Sector of Boulay. The Maginot Line was part of France’s protection during the 1930s to prevent an invasion by Germany. Such turrets could emerge from a ‘hull down’ position to fire on an enemy and were networked through underground tunnels.

3) A Duga Soviet era over-the-horizon radar (OTH) which was used as part of the Soviet Union’s missile defence early-warning radar network. There were two, the most well know of which is located near the Chernobyl and the other in eastern Siberia. This system operated from July 1976 to December 1989. It emitted a repetitive sound that could be heard on shortwave radio bands which earned it the nickname of ‘the Russian Woodpecker.’