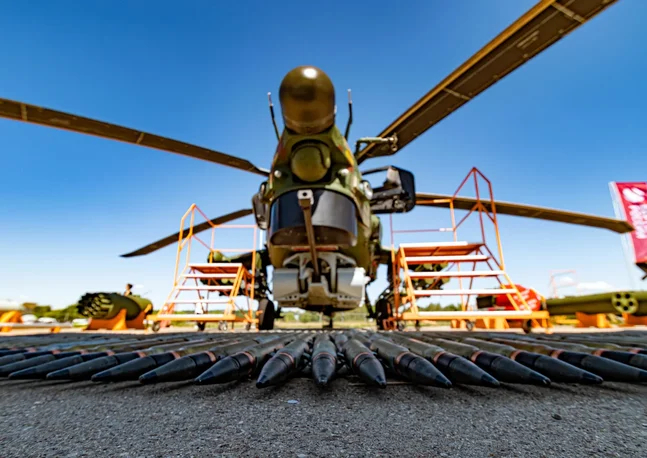 Mi-28N (the export-oriented variant is designated Mi-28NE), serially produced by the Rostvertol plant (a subsidiary of Rostec’s holding Russian Helicopters), is intended to perform combat missions in any geographical and climatic conditions (including under extremely hot temperatures), by day and night, and in adverse weather conditions. The extraordinary combat survivability and powerful armament suite are usually named the main advantages of the rotary-wing platform.

The helicopter’s armament suite includes up to 16 Ataka-family (AT-9 Spiral-2) anti-tank guided missiles, up to 4 Igla (SA-18 Grouse) air-to-air missiles, some 80 mm and 122 mm unguided rockets; 23 mm gun pods; and a chin-mounted Gryasev-Shipunov 2A42 30 mm automatic gun. The weapons have been integrated with a sophisticated fire-control system.

The self-defense is provided by a special system neutralizing anti-aircraft missiles with heat seekers. The cockpit, main subsystems and critically important components (such as fuel tanks) have armour protection. The blades of the Mi-28NE main rotor are made of composites, and a flight can still be completed even if they are hit by 30 mm rounds. Two Klimov VK-2500 turboshaft engines enable the Havock-B to perform single-engine flights and landings. The air platform also features a low-altitude collision avoidance system.

In order to meet global trends, the developers have fitted Mi-28NE with subsystems, which support interaction with unmanned aerial vehicles and their remote control. The pilots, who flew the Havock-B in combat in Syria, have emphasized the night-attack capabilities of the helicopter. “You can see a car at a distance of 15 km. Thermal imagers, special goggles – all of this is used to detect targets in the dark and gives good results. The characteristics of the Mi-28’s weapons also allow a lot; this sees and shoots further. The ergonomic features of the cockpit are better thought out, that is, the crew is comfortable here, and this is also important”, – said flight commander Maj Evgeny Seelev, in an interview with the Russian MoD’s Red Star (Krasnaya Zvezda) newspaper.