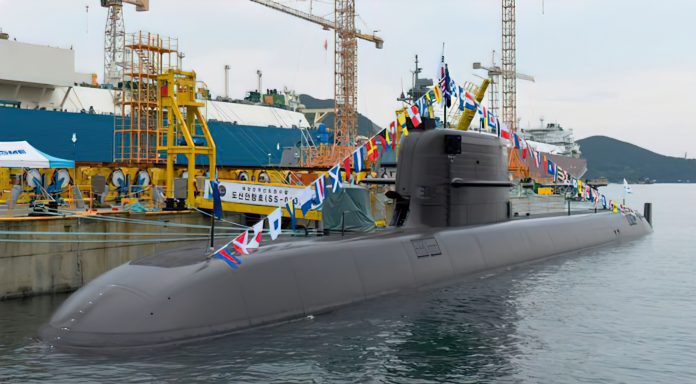 The Republic of Korea Navy (RoKN) has commissioned its first locally made, submarine-launched ballistic missile (SLBM)-capable diesel-electric attack submarine at the facilities of Daewoo Shipbuilding and Marine Engineering (DSME) on 13 August.

ROKS Dosan An Chang-ho is the lead Batch 1 boat of the planned fleet of nine KSS-III-class SSKs that will enter the RoKN fleet by 2029, with construction of the boats carried out in three tranches. Each tranche will comprise three boats, with subsequent submarines incorporating more advanced technologies.

The boat measures 83.5 m-long and has a displacement of 3,705 tonnes when submerged. The boat is equipped with a hydrogen fuel cell-based air-independent propulsion (AIP) system for extended endurance, and has a maximum stated speed of 20 kt and cruising range of 10,000 nautical miles.

Each Batch 1 series KSS-III submarine feature a six-cell vertical launch system (VLS) that can deploy the Cheon Ryong (Eagle) land-attack missiles. The submarines are also equipped with eight 533 mm torpedo tubes that can be armed with weapons such as the indigenously developed Baek Sang Eo (White Shark) heavyweight torpedo.

The Batch 2 boats are expected to be longer and displace up to 4,000 tonnes, while increasing the number of VLS cells from six to 10. These are also expected to feature increased levels of indigenous content as well as lithium-ion batteries for increased range and endurance.

The new boat is 18 m longer and about 3 m wider than the RoKN’s in-service 1,800 tonne KSS-II-class submarines, making it the largest submarine in its fleet. It’s commissioning comes after local media reported in July that the country tested a locally developed SLBM – believed to be a variant of the ground-launched Hyeonmu-2B missile – from an underwater barge.

The RoKN said in a statement that Dosan An Chang-ho will be put through a series of operational performance and capability evaluations and is expected to be operationally deployed from August 2022.

The second and third KSS-III Batch 1 boats, the future ROKS Ahn Moo and ROKS Yi Dong-nyeong, are expected to be handed over to the RoKN in 2022 and 2023, respectively.

The SLBM, which is to be fitted with a conventional warhead, is expected to be deployed with 3,000 tonne-class or larger submarines such as the KSS-III (also spelled KSS-3) boats. South Korea, which is already building the second and third boats of the first KSS-III batch, is expected to build six more submarines of the class (three per batch).

South Korean officials have also floated the prospects of an indigenously built nuclear-powered submarine, especially after North Korea announced in January that it has already completed design work on such a submarine.

From our Correspondents January 28, 2021