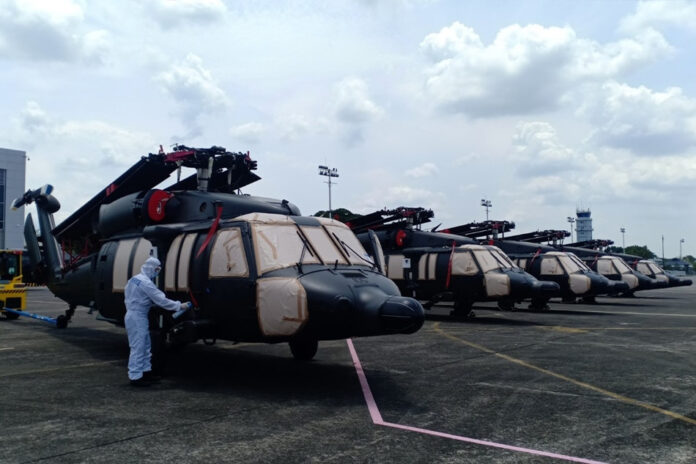 On 22 February the Philippines Department of National Defense (DND) signed a $624 million contract to purchase Black Hawk helicopters for the Armed Forces of the Philippines from PZL Mielec, a Lockheed Martin company.

The contract was for the manufacture of 32 additional Sikorsky S-70i Black Hawk utility helicopters for the Philippine Air Force (PAF). Delivery of all 32 aircraft by 2026 will increase the operational capacity of the PAF to perform search and rescue missions, humanitarian assistance and disaster relief, and troop transport across the archipelagic country.

The PAF’s 205th Tactical Helicopter Wing will receive all 32 aircraft in a utility configuration. Each aircraft will be equipped with a fully integrated digital cockpit with four axis coupled flight director, colour weather radar, integrated vehicle health monitoring system (IVHMS), cabin troop seats, and a 9,000lb (4,082kg) cargo hook. As part of the contract, pilots and maintainers will receive training both in the United States and the Philippines.

“In the aftermath of Typhoon Odette, the Philippine Air Force has shown the world how its recently acquired Sikorsky S-70i Black Hawk fleet, designed and built to the toughest military standards, can quickly and reliably deliver emergency personnel and supplies to island populations across a large maritime area,” said Jason Lambert, vice president for Sikorsky Global Commercial & Military Systems.

The Philippine contract for 32 aircraft is the largest single order of Black Hawk helicopters for PZL Mielec since S-70i aircraft production began in 2009. The contract signing comes two months after PZL Mielec completed deliveries of 16 S-70is to the PAF’s 205th Tactical Helicopter Wing in December 2021. Deliveries of the S-70is began in November 2020, one of which crashed at Tarlac on 23 June 2021 during a night training exercise, killing six on board.