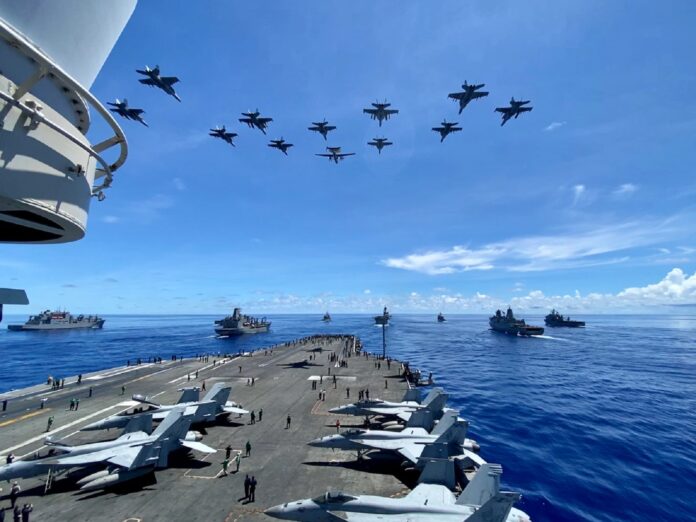 On 17 June, the US Navy concluded the ninth edition of Valiant Shield, a high-end unilateral field training exercise following 12 days of combat drills to hone skillsets necessary to win in the sea, air, land, and cyberspace domains.

The exercise took place in the Joint Region Marianas area of operations including Palau, Naval Base Guam, Andersen Air Force Base, as well as the off-shore Mariana Island Range Complex and Northern Mariana Islands.

Multiple training scenarios and demonstrations built up to the pinnacle event, which was a sinking exercise (SINKEX), centring on the decommissioned frigate ex-USS Vandegrift, that tested the effectiveness of modern weaponry on ship design and aircraft.

The latter demonstration, which was conducted on Palau for the first time, involved assets from the US Army Pacific’s 1st Air Defense Artillery Regiment, which launched two PAC-2 Patriot interceptors to intercept a drone target that emulated the signature and flight characteristics of a hostile cruise missile.

“This exercise was the perfect opportunity to conduct integrated deterrence, which was the cornerstone of our approach,” said Rear Admiral Robb Chadwick, Valiant Shield 22 Joint Exercise Control Group Director. “We combined our efforts across all warfighting domains and the spectrum of conflict to ensure that the United States, alongside our allies and partners, could dissuade or defeat aggression in any form or domain.”

Although Valiant Shield 2022 has only just concluded, the US Navy is set to embark on another major large-scale exercise. It will lead the multinational Rim of the Pacific (RIMPAC) exercise in and around the Hawaiian Islands and Southern California region from 29 June to 4 August. RIMPAC 2022 will involve around 25,000 personnel drawn from across 26 countries. The exercise will also feature 38 surface ships, four submarines, over 170 aircraft and nine national land forces.