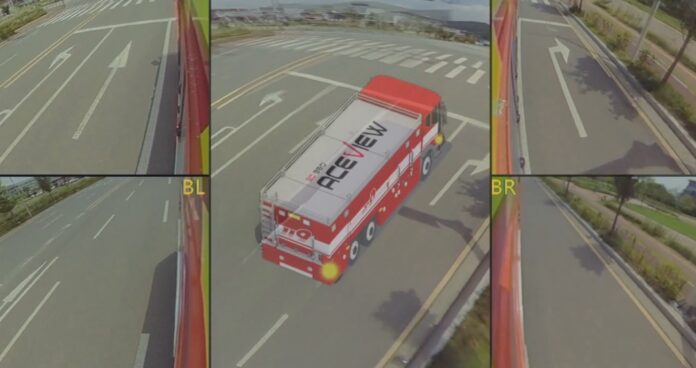 Based in Gyeonggi Province near Seoul, Aceview specialises in the development of cutting-edge driver safety products based on indigenously developed image processing technology.

Aceview’s M-AVM (3D Around View) is a 360-degree solution equipped with four multi-channel cameras – featuring ultra-wide-angle, ultra-low light, and full HD capture quality – that enables a driver to safely manoeuvre the vehicle without blind spots during the day or night.

By utilising its patented ‘Around View’ image merging technology, the driver can view the immediate environment around the vehicle with an intuitive 3D perspective rather than a bird’s eye view. It also features high-speed processing technology that fuses the imagery captured by the cameras to present a seamless video at higher speeds. Beside enhancing real-time situational awareness and safety, the saved video imagery can also be used to assist with accident investigations.

Aceview explains that the M-AVM can also be used for airborne and maritime platforms. The company has already supplied the solution to the South Korean fire service where it has been deployed aboard 500 fire engines by December 2021, as well as to the military for use aboard undisclosed types of vehicles. It is also in use by the Korean National Police Agency’s patrol boats.

The company has commenced work on a real-time video facility control platform called F-AVM, which could eventually replace conventional CCTV footage with its video processing, storage, and transmission technologies.

“[We are] South Korea’s first and only 3D Around View development, manufacturing supplier, and K-MARK certified (2021) company,” Aceview told D&S Show Daily, noting that it has also been designated as an excellent product by the Public Procurement Service and the Ministry of National Defense.

The company has also embarked on research that could expand its offerings to support the country’s Industrial 4.0 ambitions, particularly in the area of autonomous driving technology and data management using its image processing technology.