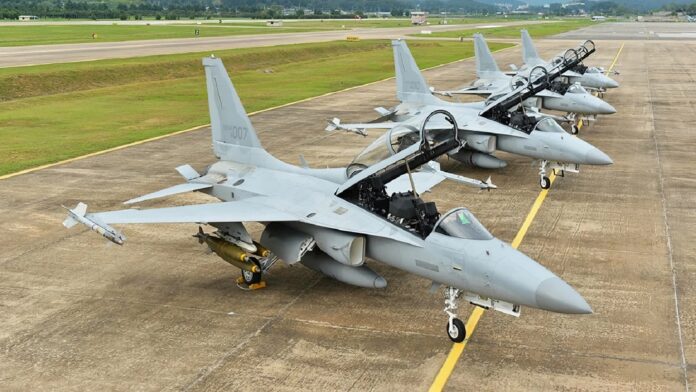 Korea Aerospace Industries (KAI) is looking to ride on the momentum of recent successes to further expand the global footprint of its T-50/FA-50 Golden Eagle advanced jet trainer/light attack aircraft.

The first batch of 12 aircraft will be delivered in mid-2023, with the remainder to follow according to an undisclosed timeline. KAI will also establish a maintenance, repair, overhaul (MRO) centre in Poland as well as an international pilot training school using the FA-50 aircraft.

In the Indo-Pacific region, KAI announced in July 2021 that it had signed a $240 million agreement with the Indonesian Ministry of Defence (MoD) to provide an additional six T-50i Golden Eagles for its lead-in fighter trainer (LIFT) programme. The company stated that the deal will run through 30 October 2024 and will include associated logistics support.

KAI previously supplied the Indonesian Air Force (TNI-AU) with 16 T-50i training jets in May 2011 worth around $400 million and was also contracted in November 2018 to provide radar and machine gun systems alongside the supply of three KT-1B Woong-Bee basic turboprop trainers in a deal worth around $89 million.

Besides Indonesia and Thailand, the Philippine Air Force (PAF) is also another operator of the type having acquired the 12 FA-50PH aircraft.

The T-50 Golden Eagle is a single-engine, supersonic aircraft developed by KAI for the Republic of Korea Air Force (RoKAF) with technical assistance from Lockheed Martin, with an eye on emerging international requirements for affordable LIFT and light-attack aircraft.

“Recently, military tensions are rising in the world due to a combination of economic crisis and diplomatic relations, and countries are increasing their military capabilities,” KAI told Bilingual Show Daily in a statement.

“Due to constant inflation and cuts in budgets, it is essential to operate a system that boasts outstanding capabilities with the minimum costs,” the company added. “[Our] T-50/FA-50 is a trainer during peacetime, and a fighter during crisis – meeting the requirements of the customer.”

“More than 200 T-50/FA-50s are currently in operation worldwide, making it the most proven aircraft for performance and reliability compared to its competitors,” it explained. “The aircraft has been operating in major [regional] countries: 16 in Indonesia since 2011, 12 in the Philippines since 2014, and 12 in Thailand since 2015.”

Earlier in June, KAI and Lockheed Martin signed a teaming agreement to market the T-50 Golden Eagle advanced jet trainer globally. The agreement is set to ‘escalate’ a strategic partnership that already exists between the two companies, with the company noting that the enhanced pact will provide an opportunity to realise a November 2021 vision between the South Korean government and local defence industries to export at least 1,000 T-50 aircraft internationally.

“First, KAI has been continuously improving T-50/FA-50’s performance and multi-mission capability to take responsibility for the increasingly diverse missions of customers,” the company told Bilingual Show Daily. “In addition, KAI is proposing customised export package deals based on the Teaming Agreement with Lockheed Martin and the formation of ‘Team Korea’ with the Korean government.”

Finally, KAI asserted that the T-50/FA-50 platform is optimised for training F-35 pilots, and therefore an ideal solution to address the growing interest in F-35 acquisition within the region.