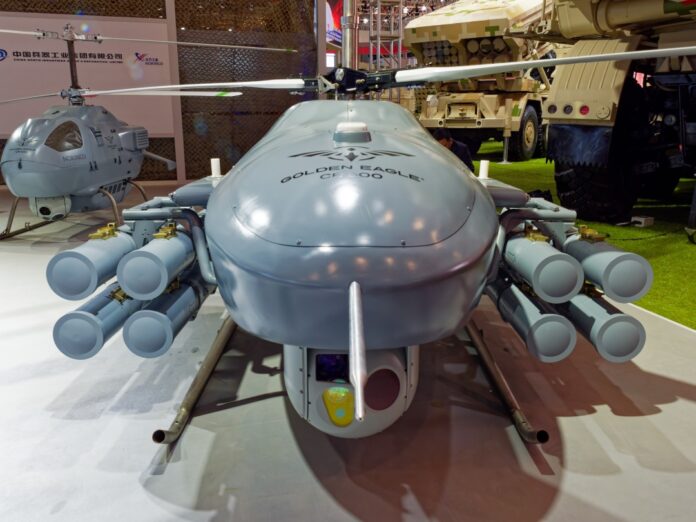 China North Industries Corporation (NORINCO) is highlighting its latest solutions for unmanned aerial systems (UAS) including fixed- and rotary-wing unmanned aerial vehicles (UAVs) and loitering munitions which can be independently operated, as part of a larger swarm, or co-ordinated in conjunction with other weapon systems.

In late 2020 NORINCO announced that it has secured an undisclosed customer for its rotary-wing Golden Eagle CR500 UAV, which features coaxial rotors and can carry various payloads depending on the mission. The strike-capable UAV has an endurance of up to eight hours, depending on the payload, and can also be used to deliver supplies. It also has potential applications in the civilian sector, including in humanitarian assistance and disaster relief operations.

NORINCO first unveiled its UAV cluster, or swarming, concept in late 2018. The concept, which can be adapted to fit various tactical scenarios, involves the use of several MR40-series and MR150-series multirotor UAVs fitted with search and targeting sensors and armed with a variety of weapons, including guided missiles and fragmentation bombs, as well as rocket munitions.

The UAV swarm can be used to engage an array of targets, including soft-skin and a lightly armoured vehicles, artillery systems, radars, military and storage facilities, communication hubs, aircraft shelters, and logistical support lines.

Meanwhile, NORINCO’s latest Cruise Dragon series of loitering munitions have a combat radius from 10km to 300km. These smart weapons can be launched by individual soldiers, tube-fired, or artillery launched to perform precision none-line-of-sight (NLOS) strikes as well as suppression of anti-radiation systems.